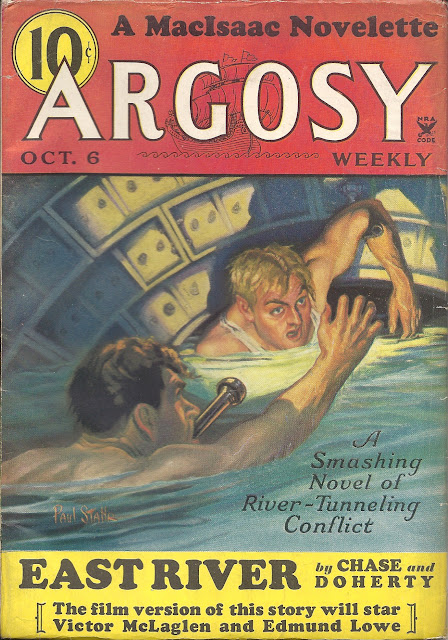 Borden Chase broke into the pulps in the March 1934 issue of Real Detective. He made it into Argosy with the novelette "Tunnel Men" that June. He then appeared in three consecutive issues of Adventure. By October he'd had a double success with East River. I'm actually not sure which came first: the serial Chase co-wrote with Edward J. Doherty -- a regular writer of nonfiction for the slick weekly Liberty --or the screenplay Fox would release the following February as Under Pressure, under Raoul Walsh's direction. I'm more certain that it was the film then in production more than Chase's good name that earned East River this cover. Chase had already established himself and his almost private subgenre of "sandhog" stories about the mighty men who dug tunnels under rivers or through mountains. The first installment seems to set up a romantic quadrangle of two brawling buddies -- Victor McLaglen would play "Jumbo," his longtime action/comedy partner Edmund Lowe "Shocker" -- and two women, one of whom loves Shocker but feels she owes an emotional debt to Jumbo, the other falling hard for Shocker but jealously recognizing the first's feelings for him. So much for the heart interest. For the male readers Chase and Doherty offer suspenseful action emphasizing how the sandhogs are always on the brink of disaster. In short, a decent opening installment. Given Walsh's rep as a canonical director, I'd really like to see Under Pressure now. Curiously, for all that Chase is best known now as a screenwriter of westerns, it doesn't look like wrote any westerns in his pulp career. 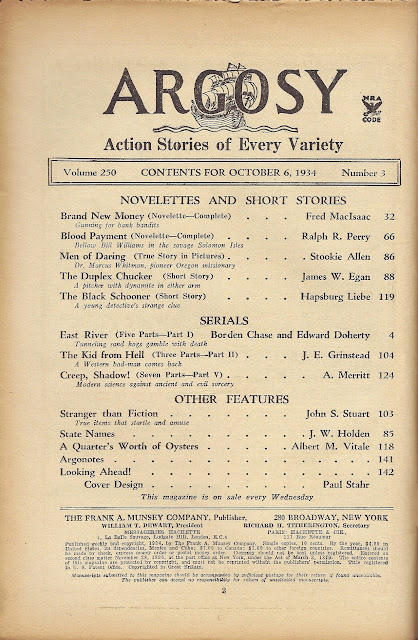 I'll have something to say about Ralph R. Perry's Bellow Bill Williams novelette "Blood Payment" when I scan and upload it this weekend. Apart from that, we continue with A. Merritt's final serial Creep, Shadow! and J. E. Grinstead's tale of alienated youth out west, The Kid From Hell, and we get a good-sized novelette from Fred MacIsaac  that I haven't read yet.  There's a baseball story by James W. Egan and Hapsburg Liebe's "The Black Schooner" about a public enemy, a Secret Service man and a band of hoboes.  In "Argonotes" there's a fascinating little letter from A. Carras of the Bronx who, inspired by the recent innovation of the Major League Baseball All-Star Game, proposes a team of Argosy all-stars -- characters, that is, not authors. Interestingly, Carras fields a co-ed lineup, designating Hulbert Footner's detective Madame Storey as his starting pitcher. Here's the rest of his lineup.

In a cute touch, Carras makes John H. Thompson's vagrants Bill and Jim the team's waterboys, and in what looks like a major dis to me he assigns W. Wirt's Jimmie Cordie "and his gang" as batboys. The real shocker here may be that Carras leaves frickin' Zorro on the bench. Apart from that, some readers may have preferred that Carras give the ball to Worts' Gillian Hazeltine, but for all I know Mme. Storey could take the defense attorney in a fight, or at least out-throw him. In any event, this list gives new meaning to the term fantasy sports, and on that note I leave you with this issue's sponsor: 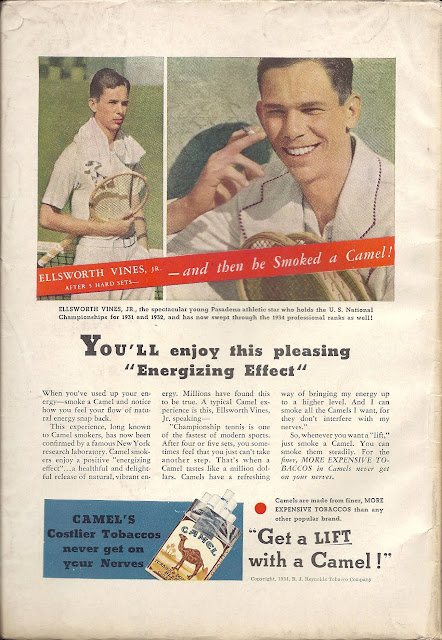 Posted by Samuel Wilson at 8:34 PM