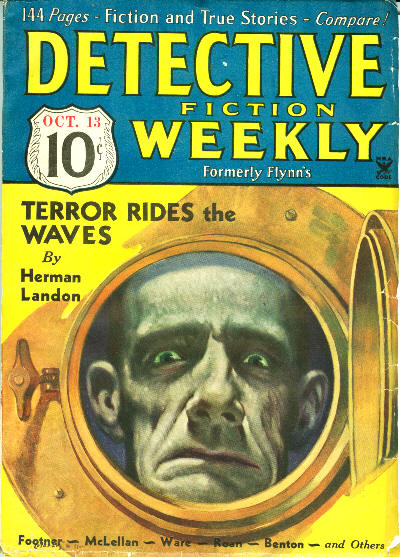 Here's a slightly startling cover from a 1934 Detective Fiction Weekly. Among the weeklies, biweeklies and twice-a-months that make up the Calendar, DFW is probably your most likely source for spooky images, apart maybe from the twice-a-month days of Dime Detective. Herman Landon has the lead novelette and Edward Parrish Ware has the last of four Ranger Jack Calhoun stories to appear this year. The other series character this issue is Laurence Donovan's Boxcar Reilly, who had a sporadic existence. After making his debut here, Reilly went dormant, according to the FictionMags Index, until Donovan revived him for Street & Smith's character-driven Crime Busters pulp in 1937. According to the Index, Donovan wrote three Boxcar stories for Crime Busters, while Norman A. Daniels contributed another. Hulbert Footner of Mme. Storey fame continues his serial The Four-Toed Track, while David Crewe and Stephen Terry contribute short stories. David Crewe is listed as a house pseudonym for Popular Publications, but that doesn't account for the four stories under that name that appeared in Munsey's DFW in 1934-5. There's also a good-sized nonfiction piece by Tom Roan and the first in an occasional series of "Jujutsu" lessons from one John Yamado. Really, though -- how can you turn that face down???
Posted by Samuel Wilson at 12:51 PM