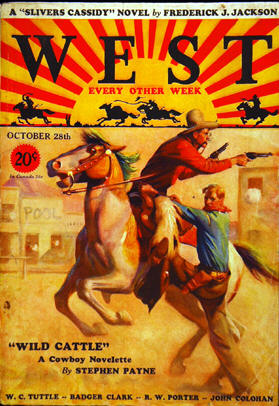 One way to take your  mind off a gloomy winter, whether the weather or the news causes your gloom, is to bask in the sunlight of a vintage West cover like this one from 1931. The only name in the table contents that really means anything to me is W. C. Tuttle, who finishes his two-parter The Vinegaroon this issue. Frederick J. Jackson's Slivers Cassidy first appeared in Adventure way back in 1914, but the series didn't really start until Jackson brought the character West in 1926. There aren't really that many stories in the series -- the FictionMags Index counts nineteen stories, including one serial, though it looks like there are more than that -- and to my knowledge the series hasn't been anthologized but Slivers was popular enough to be name-checked on the cover most of the times he appeared. Jackson wrote stories, plays and screenplays in many genres; his best known stage/screen work may be The Bishop Misbehaves. As for the other authors, I've seen Stephen Payne's name a lot but I don't really have an opinion on him, and I have even less to say about Benjamin F. Ferrill, Norrell Gregory and Raymond W. Porter. West was coming out "every other week"  at this point but would have to go monthly approximately one year later. Doubleday, Doran did everything possible, it seems, to keep Short Stories on its twice-a-month schedule but West ultimately proved expendable, and by the fall of 1935 it was in other hands.
Posted by Samuel Wilson at 12:36 PM