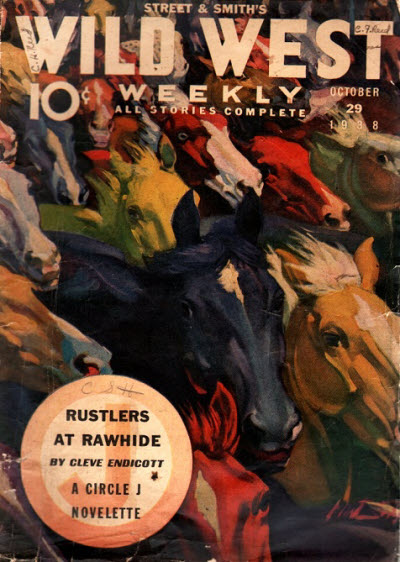 Wild West Weekly was the first of Street & Smith's western weeklies to adopt a more ambitious cover art policy in the fall of 1938, and this brilliant piece of work from H. W. Scott was an early result. It would be a few weeks more before Western Story caught up. As usual, series characters predominate, including the magazine's flagship character, Billy West of the Circle J ranch, as written by Allan R. Bosworth under the Cleve Endicott house name.  This issue also features the last of six interrelated novelettes about Jim Tate by  Lee Bond as Andrew A Griffin, as well the latest Flash Moran story by William F. Bragg and the fourth in the short-lived Fiddlin' Deputy series by Harvey Maddux. Lee Bond gets another story under his own byline this week, while Samuel H. Nickels rounds out the fiction lineup. Maybe it drew a stampede of readers to the newstand like the stampede of horses on the cover.
Posted by Samuel Wilson at 4:02 PM