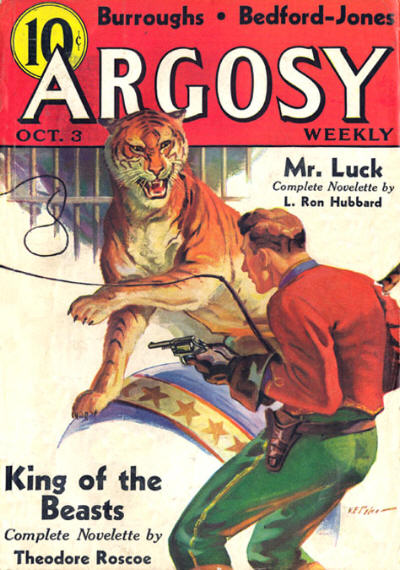 This is probably the most expensive 1936 Argosy any collector will buy, if not one of the most expensive issues of the entire 1930s. That's because it features the three most collectible names Argosy published in those years. None of them is Theodore Roscoe, even though he has the actual cover story this time. However, L. Ron Hubbard is one, with his novelette "Mr. Luck." Edgar Rice Burroughs, mentioned curtly on top, is another, continuing his latest Tarzan serial. The third, who never had his name on an Argosy cover, is Robert E. Howard, who died on June 11 of this year. Friendly editor Jack Byrne, who had published Howard's boxing fiction in Fiction House's Fight Stories, wanted to promote Howard as a writer of comic westerns, but didn't start publishing the adventures of Pike Bearfield, the character Howard created for him, until this issue. Three Bearfield stories would appear during October, once every two weeks. I haven't seen any contemporary Argonotes to tell how Argosy readers responded to Bearfield, but some writers suggest that had Howard lived he might have had a very different identity as a writer and might be remembered today as a western humorist first and a sword-and-sorcery pioneer only later. I don't know. I haven't read the Bearfield stories but I've tried some about his precursor, Breckinridge Elkins, which Byrne published in Action Stories, and wasn't impressed. Admittedly,  I only read a couple of early stories, but I didn't find their "Haw haw, I guess I don't know my own strength" tone that funny. I prefer the El Borak stories that were appearing elsewhere at the same time, not to mention Red Nails, the Conan serial that had wrapped up in Weird Tales the previous month. But as faithful readers may have noticed already, I don't read pulps for laughs, unless they prove unintentional.

Not that they add to the resale value, but L. G. Blochman and H. Bedford-Jones have serials running this issue, while Anthony M. Rud and James Stevens contribute short stories. Speaking of big-name writers once more, however, French author Andre Malraux, some of whose subject matter would not be alien to pulp fiction, is this week's Man of Daring, as delineated by artist Stookie Allen. Quite a lineup, overall.
Posted by Samuel Wilson at 12:28 PM