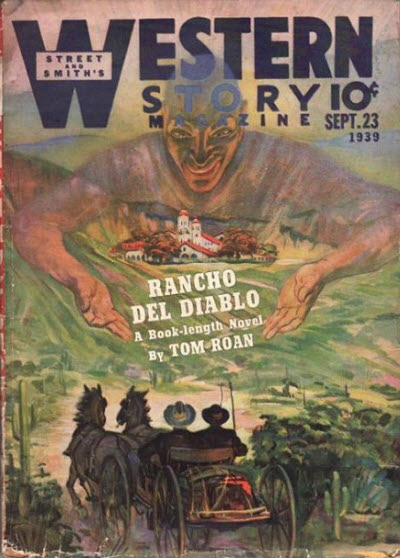 H. W. Scott doesn't quite pull it off this time -- the ghost or devil looks a little too sketchy to me -- but it's another cool cover design for a 1939 issue of Western Story. The magazine's "book-length novels" might not always live up to billing -- Tom Roan's "Rancho del Diablo" is 47 pages -- but they do result in less variety than you'd get in other pulps of similar size. There are only four works of fiction in this 128 page issue. Along with the Roan, you get a good-sized chunk of Jay Lucas's serial Range of Hunted Men and two short stories, John Colohan's "Luck of the McRories" and Mojave Lloyd's "Saddle Savvy." There's arguably a higher percentage of nonfiction here than in other western pulps, given the number or regular columns as well as Gerard Delano's epic-length "Story of the West," which reaches part 73 of 105 this issue. Then again, since Western Story was a weekly, this balance of fiction and nonfiction probably made it easier for regular readers to keep up. And since Western Story remained a weekly longer than just about any other pulp, Street & Smith clearly were doing something right.
Posted by Samuel Wilson at 12:17 PM