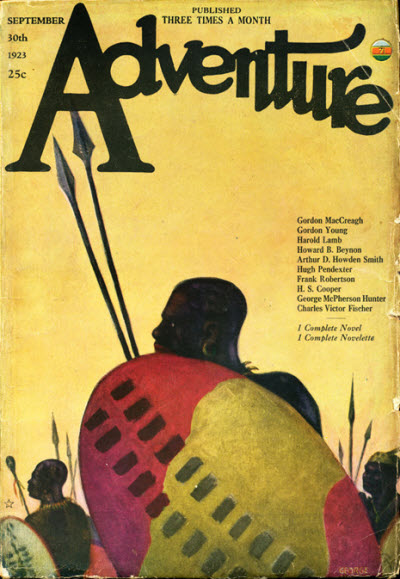 An attractive 1923 Adventure cover by George Annand closes out the month. The highlights of this issue most likely are a story of Swain the Viking, one of pulp's most badass heroes despite being a teetotaling Christian, by Arthur D. Howden-Smith, and Harold Lamb's tale of two of his Cossack heroes, Ayub and Demid. I have the Bison Books collections of Lamb's Cossack stories -- they're great stuff -- but I haven't gotten to that particular one yet. Other dependable names include Gordon MacCreagh and Hugh Pendexter, and Gordon Young certainly was popular with contemporary readers. You also get Frank C. Robertson, Howard B. Beynon, H. S. Cooper and Charles Victor Fischer, but Lamb and Howden-Smith should be enough to sell this particular issue.
Posted by Samuel Wilson at 12:09 PM