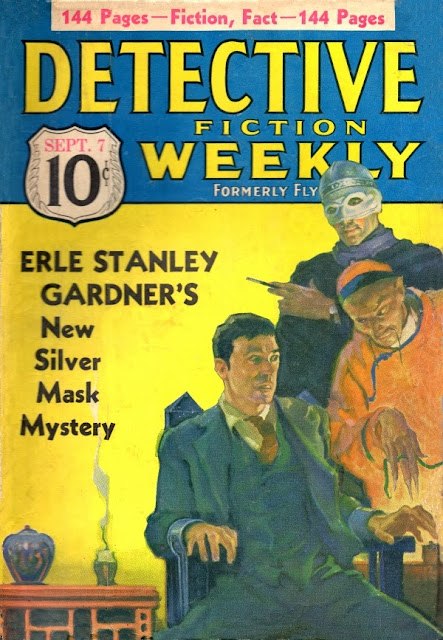 Here's the second of three Detective Fiction Weekly appearances from 1935 of Erle Stanley Gardner's mystery man, The Man in the Silver Mask. He's a vigilante who, in language anticipating The Green Hornet, "hunts the biggest of all big game -- public enemies that not even the G-Men cannot reach." Like the Hornet, Silver Mask has an Oriental ally, though for all I know the resemblances end there. I don't think Britt Reid or Kato was into torture quite as much as these gentlemen appear to be on the cover. Still, Silver Mask arguably is a precursor to the costumed crimefighters who would appear in comic books within a few years. Along with Gardner, who by now had made a mainstream hit with Perry Mason, this issue features DFW regulars Fred MacIsaac and Richard Sale, the former continuing his Strike-Breaker serial, the latter contributing the novelette "The Dancing Corpse." H. W. Guernsey, H. H. Matteson, and Fridtjof Michelson contribute short stories. On the non-fiction side you'll learn about "The Murder of the Perfect Woman," and "When Burglars Become Bandits." The latter article is written by "Ex-Burglar." I suppose that makes him a bandit.
Posted by Samuel Wilson at 6:44 PM