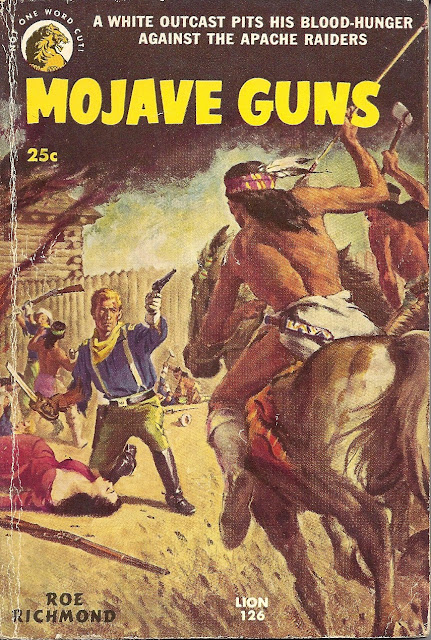 Roaldus Richardson started out writing for the sports pulps in his mid-twenties during the mid-1930s. He used the nickname "Roe," which I assume rhymes with "Joe," though I suppose "Roey" is another possibility and was actually my first guess. The alternative sounds like a pen name the Jetsons' dog might give himself. During World War II Richmond started publishing western stories, and by the 1950s the western was his main genre. He stuck with pulps until very late in the game, writing many of "Jackson Cole's" novels about Jim Hatfield in Texas Rangers magazine, which lasted until 1958. Throughout this period Richmond published novels like Mojave Guns, which first appeared in a cheap hardcover edition issued by Arcadia House. It doesn't look like the story first appeared in pulp. The paperback was published by Lion, the book-publishing arm of Martin Goodman's Timely Comics, the ancestor of today's Marvel. I'd thought that I wouldn't find grimmer back-cover copy than came with Give the Little Corpse a Great Big Hand, but for Mojave Guns Lion came up with strong competition. 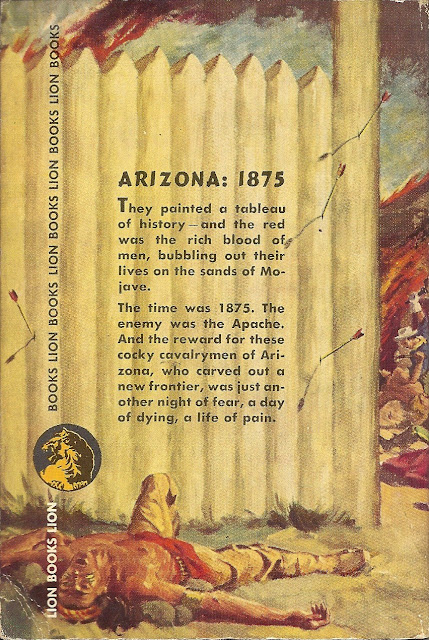 Richmond's novel is violent Indian-fighting fiction with little regard for the Apaches battling the U.S. Cavalry. At times the Indian fighting takes a back seat to infighting within the cavalry. Chris Herrold is a West Point graduate seeking redemption and revenge in Arizona Territory. His father was killed by Indians after earning a reputation as an overzealous butcher of his own men, while his brother was fragged by a soldier officially unknown for cowardice. Chris takes after his father and is good at getting his own men killed, earning him the particular contempt of Rick Montrell, an ex-Confederate with little patience for book soldiering, whose brother died during the battle that led to the murder of Chris Herrold's brother. It's possible Rick did the deed himself, though there are other suspects among the veteran troopers. Chris is the odd man out with the eligible women of Fort Burnside, rivaling Montrell for Anita Raven, the daughter of the unit's wise old scout, and also rivaling a nearby rancher, Kirby Tisdale, for Teresa Thurston, the commanding colonel's daughter. Chris always means well, though he's a bit too anal about uniforms for his own good, but his profound alienation turns him against just about everyone, not to mention the Apaches.

Relegated to quartermaster duty after his latest debacle, and later relegated to the guardhouse after fighting with a real asshole of a brother officer, Chris seethes with self-loathing and rage while Rick leads an expedition in search of the secret hideout of Chief Hatchese's Apache band. Finding their lair thanks to the old scout, Rick sends his main force back to Burnside to bring along the colonel and sufficient manpower and firepower to crush Hatchese. Richmond intercuts from the harassed ordeal of the men riding back to Burnside to Rick's survival ordeal in dangerous proximity to Hatchese to the deteriorating situation in the fort as a truly incompetent officer struts his stuff with Chris stuck in stir. Ultimately the battle comes to the fort, where Chris Herrold gets one more chance to redeem himself and makes the most of it. Richmond gets it all done in an efficient 124 pages of what they used to call "fast action," effectively sketching the torment of cavalry warfare in the desert. It may be too brief only because Kirby Tisdale is an underdeveloped character who proves more important in Richmond's plot than you'd expect him to be -- and no, he didn't kill Chris Herrold's brother. In short, he ends up with more than he seems entitled to, but on the other hand this means Richmond doesn't deliver a predictable finish. Mojave Guns is the first long-form work I've read by Roe Richmond, and it was good enough to make me willing to try some more.


Here's a panoramic view of the novel's wraparound cover: 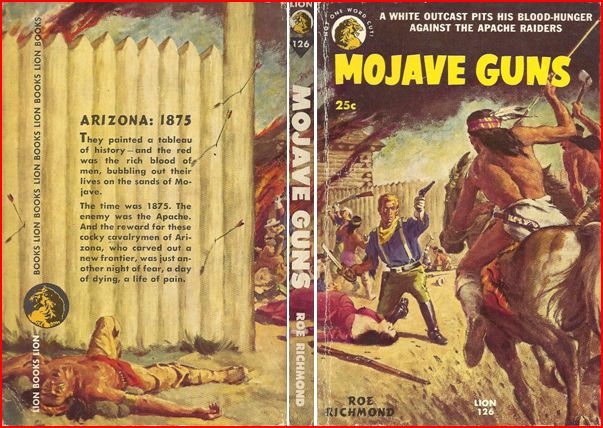 Posted by Samuel Wilson at 7:28 PM