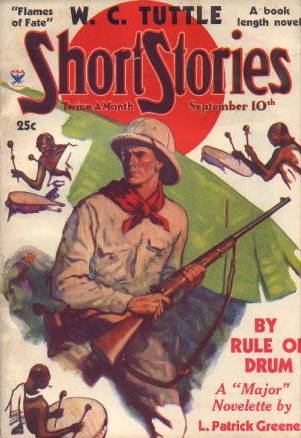 L. Patrick Greene's Aubrey St. John Major, aka "The Major," may have been portrayed more often on the cover of Short Stories, his second home after his early years in Adventure, than any other series character. Here he is in 1934, as painted by cover artist/gun columnist K. H. Kuhlhoff.  Greene's novelette "By Rule of Drum" isn't the longest piece in the issue; that honor goes to W. C. Tuttle's novella "Flames of Fate," while Roy Vickers' serial chapter is also longer. But The Major is clearly the star of this issue, which also features a story by multigenre master Murray Leinster and work from such lesser-known names as Reginald C. Barker, Frank J. Leahy, Patrick O'Keefe, George Rosenberg (aka George Armin Shaftel) and Edward T. Turner.  The Major's busiest years as a cover subject, running up to the end of the decade, actually were yet to come.
Posted by Samuel Wilson at 5:07 PM