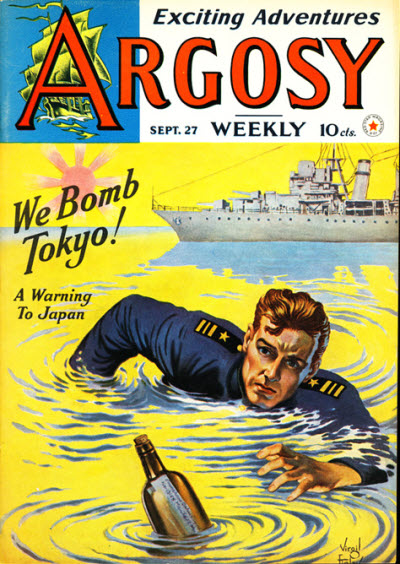 The Munsey corporation desperately continues tweaking Argosy's cover format in 1941. There are two changes from the last 1941 issue we looked at, two weeks ago. Argosy has eliminated the white sidebar that occupied about a third of the cover and advertised several authors and stories each week. More importantly, Munsey has reinstated fully-painted covers, starting with this one by Virgil Finlay. More unhappily, Argosy continues its most recent trend of highlighting nonfiction, though this issue's cover story by Jay Hamilton is part speculative fiction, describing an American bomber attack on the Japanese capital while weighing the likelihood of such a scenario. I guess you had to be there to appreciate the thought that truth was more exciting than fiction. The fiction highlights are war-themed novelettes by Louis C. Goldsmith and Joel Townsley Rogers. On the serial front Jack Byrne wraps up his western Cowboy, Ride Your Luck! while William Gray Beyer continues his sci-fi comedy Minions of the Shadow. There's hardly anything as insufferable as a sci-fi comedy from this period. This one continues a series Beyer started in 1939, focusing on a 20th century man who wakes from suspended animation after 5,000 years and befriends Omega, a nigh-omnipotent, whimsical being -- you know, the sort of highly-evolved character who pretty much has magical (if not divine) powers because, well, why wouldn't he? One of that series was enough for me, and Minions of the Shadow is the fourth. There are also short stories by John Russell and Hal G. Evarts, as well as Luke Short's charming "Paper Hero," the story of a busy pulp writer who finds himself accused of plagiarism. This issue is part of the unz.org Argosy trove, but I haven't really read much of it.  The war stuff isn't what I'm looking for in pulp fiction, and the Beyer is probably pretty bad. We saw a few weeks ago that Munsey could still throw a passable Argosy together even at this late point, but worse for the venerable weekly is still to come....
Posted by Samuel Wilson at 1:55 PM