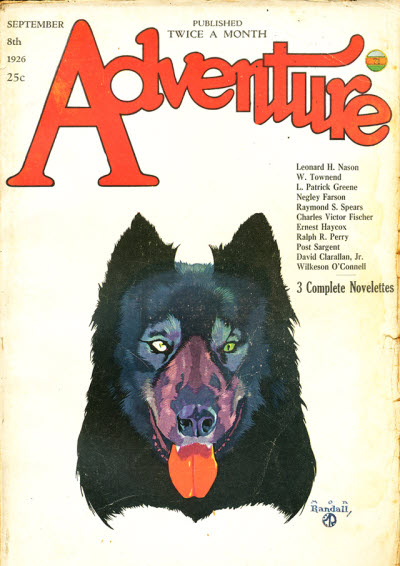 Most twice-a-month pulps had cover dates of the 1st and 15th of each month, the great exception being Short Stories, which preferred the 10th and 25th. When Adventure first went twice-a-month in 1917 its cover dates were the 3rd and 18th. When it reverted to twice-a-month in 1926, after nearly five years as a thrice-monthly, it used the 8th and 23rd as cover dates for the remainder of the year, plus an extra issue dated December 31, before adopting the more conventional 1st and 15th dating system. To sum up, this 1926 issue is the only September 8 Adventure there is, and it's an intriguing mix of familiar faces and proven talents along with writers who are pretty much strangers to me. The proven quantities include L. Patrick Greene (of Major fame), Ernest Haycox, Ralph R. Perry and Leonard H. Nason, the last in the middle of Chevrons, a five-part serial. Raymond S. Spears and Charles Victor Fischer were established names who've never made much of an impression on me. Negley Farson, Wilkeson O'Connell and W. Townend are just about meaningless names to me, while David Clarallan Jr.'s "The Cannibal" is apparently his only pulp story anywhere. He presumably tells something of himself, as was expected of first-time Adventure authors, in this issue's Camp-Fire letters section, but Clarallan, described as a traveler in the FictionMags Index, didn't hang around the fire too long.
Posted by Samuel Wilson at 4:59 PM