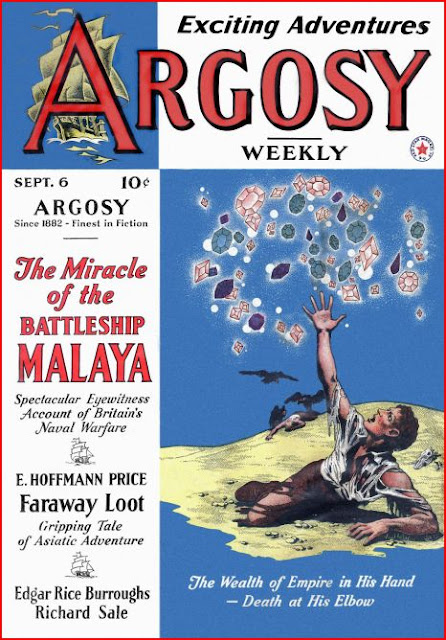 This 1941 Argosy concludes Edgar Rice Burroughs' The Quest of Tarzan. The ape man has divided the shipwreck survivors into two colonies: the good people and the bad. The bad colony is a collection of stereotypes: both the old-fashioned "pig-eyed" German and the ultramodern Nazi, as well as an Arab slave trader and a bolshevistic Russian malcontent. Tarzan is right to separate them from the good guys, but in some possible parable about appeasement the good people try to help the bad guys while Tarzan is away battling Mayan transplants on this South Pacific isle, and the bad ones promptly steal everything valuable and run amok. They get what they deserve, while Tarzan first rescues a Mayan "native" from sacrifice, then does the same for a British woman who wanders into captivity. The Mayans think the ape man to be "Che," the god of the forest. I wonder whether Ernesto Guevara knew that meaning of the word when he took it as his nickname. In any event, the good people get off the island and Tarzan goes on his way. Burroughs would write one more Tarzan story involving the ape man in World War II. He submitted it to Argosy in 1945, but by then the magazine was Popular Publications' flagship monthly, and its editor turned Burroughs down. He published it as Tarzan and the Madman in 1947. 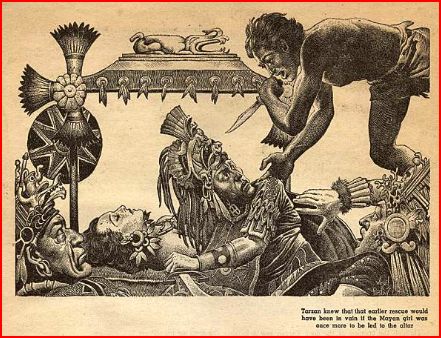 This issue has an ominous novelty to it. For the first time I can think of, Argosy headlines a non-fiction story; an anonymous (ghost-written?) account of "The Miracle of the Battleship Malaya," illustrated with photographs. The closest Argosy ever came to doing that before was in 1936, when it launched White Adventure, George O. Norville's serialized memoir of an Antarctic expedition. As 1941 ground on, the magazine would recruit its fiction writers to pen non-fiction war articles. You get the feeling that Argosy was chasing a "men's" audience that already was starting to grow alienated from fiction at a moment when the news arguably was more dramatic than any fiction. Of course, Blue Book had solicited non-fiction pieces for ages, but those always ran in the back of the book. Something else was going on here that points toward the supplanting of pulps a decade or so later by men's adventure magazines touting the reality of every outlandish tale they told. For now, however, we're still more interested in the fiction. 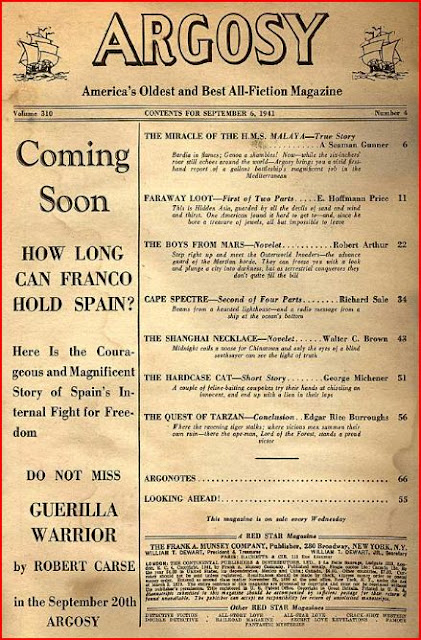 E. Hoffmann Price was one of the authors tasked with writing factual war stories later in the year. I doubt his December 13 report on the Philippines was more exciting than this issue's opening installment of his two-parter Faraway Loot. This is old-school pulp in a relevant setting: China, one theater of war where the action was not yet dutifully rendered as a morality play. The American hero has to haul out of a Central Asian city controlled by a Soviet diplomat, who gives him a treasure the man fully expects to reclaim by robbery. This is the Terry and the Pirates territory of clashing warlords, individual freebooters and the nebulous Invader on the horizon. I enjoyed it thoroughly and now regret that no one has scanned the September 13 issue with the conclusion. 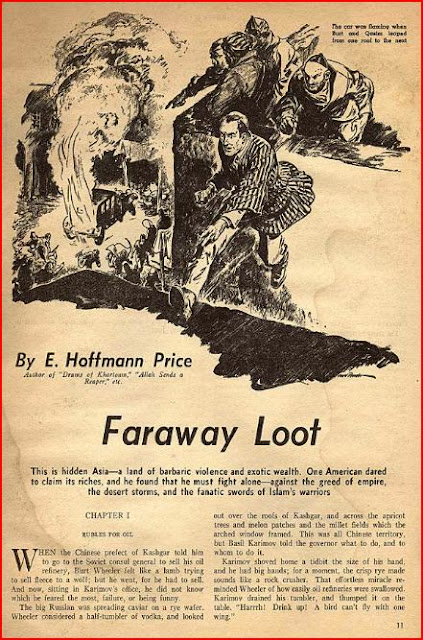 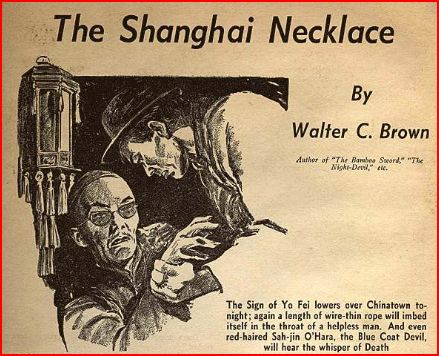 We leap from China to Chinatown with Walter C. Brown's "The Shanghai Necklace." Along with Arden X. Pangborn, Brown was one of Argosy's Chinatown specialists. The difference between the two authors is that Brown often made his American policeman, Sergeant O'Hara (called "Sah-jin" in the hood) the hero of his stories, while Pangborn's policemen were often ignorant bigots. I have a theory that the Chinatown genre was the precursor of today's "urban fantasy" genre, which imagines colonies of supernatural beings living by their own laws in our midst. On their own terms, Chinatown stories must have appealed to readers with guilty fantasies of getting away with murder, as Chinese protagonists often do on the premise that their victims have it coming. Here, however, the murderer is a bad guy and it's up to "Sah-jin" to figure out who he is. While it's more fun to have Chinese protagonists like Pangborn's Wong Soo, Brown's story is still unapologetic pulp and helps make this issue the most entertaining of the 1941 issues we've looked at recently.

I even liked a story I didn't expect to, Robert Arthur's "The Boys From Mars." I didn't expect to like it because it's a sci-fi comedy in that arch style that introduces the protagonist with mock pretension as "Mr."  Worse, Mr. Dexter Dexter is a verbose. bombastic figure who should have been insufferable just on the strength of his name. Yet I was amused by his indefatigable cluelessness when confronted by saurian visitors from the planet Mars, whom he assumes almost to the end to be no more than carnival freaks. The Martians themselves are charming. Tinkerers determined to be the first Martians on Earth, would-be conquerors without being menacing, hypochondriacs who heard Orson Welles' "War of the Worlds" broadcast and know to be on the lookout for germs, and yet so endearingly naive as to be captivated by a pulp magazine serial space opera. Their greatest regret on leaving the planet -- the food doesn't agree with them -- is that they won't find out what happened to the heroine after the cliffhanger. I usually find Arthur to be a bland author representing Argosy at its worst in its declining years, but "Boys From Mars" was better than it had any right to be. Since Richard Sale's serial Cape Spectre isn't really bad and George Michener's trifle "The Hardcase Cat" is over quickly, this issue as a whole shows that even at this late, bleak moment in its history -- it will cease to be a weekly one month later -- Argosy could still put together a credible package of pulp fiction when the stars were right.
Posted by Samuel Wilson at 7:11 PM