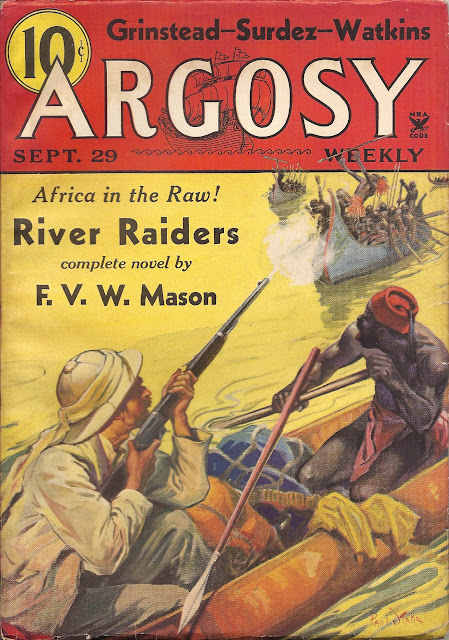 Little more than a week before this 1934 Argosy marked its anniversary on this blog, a member of the Yahoo pulpscans group uploaded a complete scan of it. Back in July, Foreign Legion fan and blogger Jack Wagner uploaded a scan of the issue's best story, Georges Surdez' "Military Prisoner." As there's no table of contents for this one in the FictionMags Index, it's my cultural duty to give you the original. 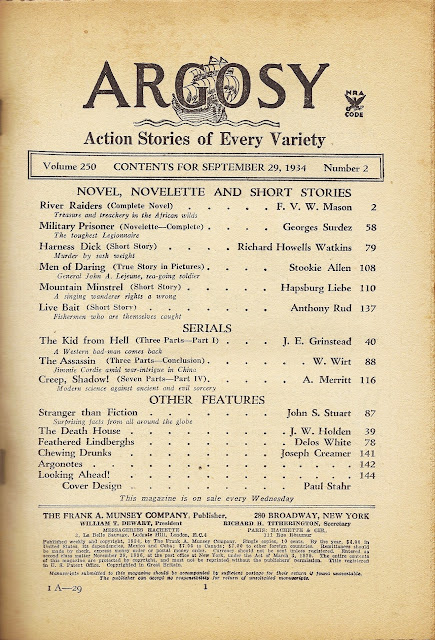 F. Van Wyck Mason's cover story is a typical pulp redemption tale. An American doctor is ruined professionally and socially after his performing euthanasia on a wealthy patient, at her request, is exposed and denounced. He becomes a hard-luck trader deep in darkest Africa, when who should show up looking for guides but his enemy and his former beloved. I think you can take it from there, but it's entertaining enough. Calling it a "Complete Novel" at 38 pages is a stretch, but Argosy was flexible about type size in its effort at this time to cram as much content into 144 pages as possible, and "River Raiders" is satisfyingly dense. Nevertheless, "Military Prisoners" takes the honors this issue, as an Surdez story is likely to do. The real disappointment here is the concluding chapter of W. Wirt's The Assassin, the last appearance of Jimmie Cordie and his merry mercenaries, thought they'd make at least one encore appearance in Short Stories the following year. In this three-parter,  Japanese conspirators hope to provoke a break between the U.S, and their country by having an American gangster assassinate Henry "The Last Emperor" Pu-yi, their puppet head of state in Manchuria.The main problem with the story is that Cordie and his band are so invincible by now that Wirt can't maintain any suspense. More than ever, the serial seems like an excuse for Wirt to indulge in the vaudeville shtick of those aggressively ethnic antagonists, Irish Red Dolan and the self-dubbed "Fighting Yid." I've liked the other Cordie stories I've read, but it was sad to read this. For most contemporary readers the real highlight was more likely the new installment of A. Merritt's long-awaited serial Creep, Shadow!, reviving his characters from Burn, Witch, Burn! I've never read any Merritt despite his great reputation as a fantasist, but I found this installment of his last major work pretty interesting. The rest of the issue is okay, and I'll reserve comment on J. E. Grinsted's The Kid From Hell until next week. For now, this issue of Argosy is sponsored by: 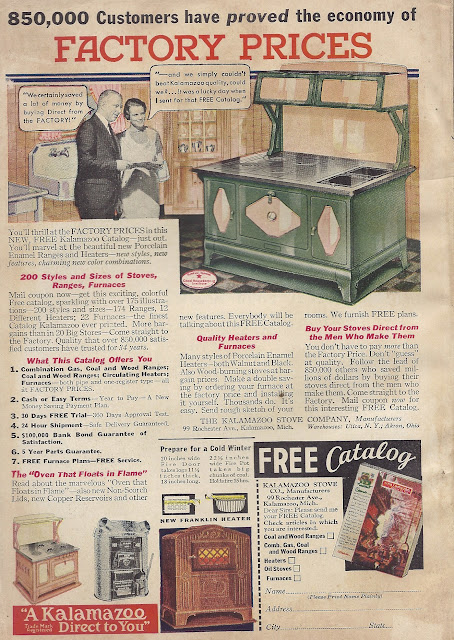 Posted by Samuel Wilson at 5:01 PM