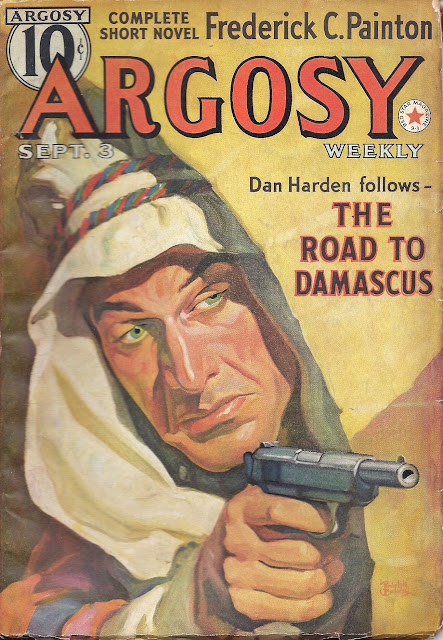 You're looking at Dan Harden, a two-fisted insurance claims investigator for the International Surety Company whose work takes him around the world. His first appearance that I know of is "Coronation Interlude," a novelette in the October 23, 1937 Argosy. By July 9, 1938's "Pharaoh Had a Tomb," he merits an Argosy cover. His last appearance that I know of is in February 1941. This cover for "The Road to Damascus" promises exotic adventure, but the Middle East setting amounts to little more than local color. Harden is sent to Jerusalem to investigate a kidnapping that proves to have been a dognapping, and gradually uncovers an English widow's plot to shut her stepdaughter out of an inheritance with the help of the bubonic plague. The local color takes the form of a supporting cast headed by "Hussein the Magnificent," a local fixer who pumps the other locals for information while pumping Harden for the last few pounds he needs for passage to Paris, where he plans to become a rug merchant. A typical pulp hero, Harden himself is blood-brother to a prominent sheik, a relationship he can play like a trump card in a sticky situation on the title road. Painton does a decent job shifting the tone of his story from broad humor -- Harden and his wife are eager to leave home in Paris for anywhere when her obnoxious relatives turn up -- to outright horror when Harden discovers the poor stepdaughter in a plague-ridden, rat-infested archaeological dig. Pretty good overall.

"Road to Damascus" is the only story I've read from this issue, though the main reason I have the magazine is the concluding installment of Donald Barr Chidsey's serial Midas of the Mountains.This is typical of me. I buy one thing, and then I buy another and the last thing ends up closer to the bottom of the to-read pile. The Pulp Calendar has actually been useful in getting me to read some early purchases that I've neglected. I also look forward to Arden X. Pangborn's "A Cell For Wong Soo," because Chinatown stories fascinate me. Pangborn's series about Wong Soo and his father Wong Sun began earlier in 1938 and continued into early 1940. Old-timer James Francis Dwyer has a short story, "The Devil's Mushroom," which is unusual for Argosy in this period for having an extra illustration besides the usual title-page piece. There are also stories by Howard Marsh and Robert Neal Leath, while Bennett Foster continues the western serial Cut Loose Your Wolf and Frances Shelley Wees continues her mystery Lost House. Argosy's decline has already begun -- its page count fell from 144 to 128 earlier in 1938 -- but the content doesn't really show it that much yet.
Posted by Samuel Wilson at 5:18 PM