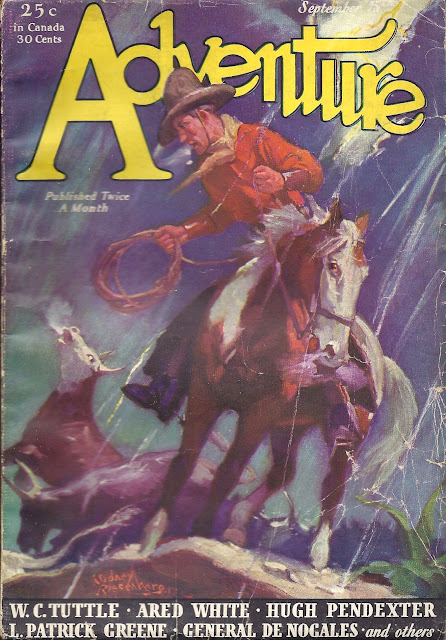 This is a 1931 Adventure from my own collection. I don't think it's an intact copy; my understanding is that in this era you had an advertising section before the table of contents that, if such was still the case in 1931, has been cut away. Still, the content that counts is intact, though I don't think I'd risk cracking the 192 page magazine's spine to do any serious scanning. I've only read about a third of the issue so far, and the stories are pretty good.

In this era Adventure's covers rarely if ever illustrated any of the stories inside, but you could imagine that Sidney Riesenberg's cover is a portrait of Hashknife Hartley, W. C. Tuttle's most enduring western hero. Hashknife's career began in Adventure in 1920, and there he stayed, for the most part, until 1935, apart from a few forays into Argosy. From 1935 to 1951 Hashknife was a star of Short Stories, though Tuttle created a kind of poor man's version of the team of Hashknife and Sleepy Stevens for Exciting Western's Tombstone and Speedy series in the 1940s. The original Hashknife was the exemplar of Tuttle's pulp specialty, the cowboy detective, though the author is at pains to deny pretentious claims for his hero's genius in this introduction to him (or reintroduction) from this issue's opening installment of the two-parter The Make-Believe Man.

Hashknife was no super-sleuth of the range country, but he did have a keen mind and a keen eye for small details, together with a bulldog tenacity. He was a product of the cattle range on the Milk River, Montana; the son of an intinerant minister who had almost too many sons and daughters to share his pittance. So little Henry Hartley, with only a smattering of education, went into the world to win a living.

He grew up quickly, both physically and mentally, a student of human nature, a crude analyst of things. Drifting down through the cattle country, he stopped for a while at the famous old ranch that gave him his nickname, and there he met Dave – Sleepy – Stevens, another cowboy with an itchy foot.

The other side of the hills called to both of them, and they rode away together, just a pair of vagabond cowboys.

And many a rangeland had passed under their horses’ feet since that day, and many a hill had seen them go up one side and down the other. It had not been a profitable partnership. Right now they had less money than they had the day they rode away together, but behind them were deeds well done and memories that money could not buy.


In this story Hashknife tries to solve the killing of a fellow saddletramp he knows to have been a real, professional range detective, along the way embroiling himself and Sleepy in the family drama of a woman whose son robbed her, supposedly to pay off a gambling debt, and whose daughter-in-law still lives with her. To Hashknife that doesn't add up; someone that low wouldn't pay any sort of debt. Where he goes with that insight I won't know until I see the October 1 issue someday.

Fortunately there are several satisfactory stories complete in this issue. The best so far is L. Patrick Greene's "Justice," surprisingly frank in its acknowledgment of the sexual exploitation of African women, often the wives of colonial troops, by British officers. The story's hero has the hard-earned respect of his Black Watch, former Zulu warriors, but has to take extra steps to defend their honor after forbidding them from killing the African orderlies who act as procurers for the predatory British. Just as Greene's portrayal of Jim the Hottentot in his Major series evolved over time so that Jim was virtual co-hero of some stories, so here, despite some inevitable racism, he sympathetically portrays the Black Watch's demand for respect as men. I like that Greene resorts to that old pulp standby, the white man's charm that supposedly will detect a guilty party, only to blow right past that point where other stories climax to get to the meat of his subject.

Also very good is "First Command," by Jacland Marmur. A writer I discovered in unz.org's collection of Collier's Weekly, Marmur was pulp's answer to Joseph Conrad: a native of Poland who wrote sea stories in English. This one sets up a cliched situation of two young officers whose lifelong rivalry is punctuated by fistfights in every shared port of call, who end up getting their first posts or serious responsibility on the same ship. When disaster strikes almost instantly, the rivalry vanishes almost as instantly as the men's professionalism comes to the fore.

The last story I read before deadline was L. G. Blochman's "Monsoon." It's well-written but misguided, as Blochman is more interested in the British officer facing criticism from an impatient colonial elite than in his improbable and thus automatically more interesting antagonist, a Canadian World War I veteran who inspires a native uprising. We simply don't learn enough about this man apart from an idealistic belief in liberty that defies the officer's experienced cynicism. It's not that the officer doubts that Indians want liberty; it's just that he knows them to be peasants first who'll revert to peasant ways at the first opportunity, which he strives to provide to them. Maybe it's just my anti-imperialist bias talking (despite my fascination with imperialist stories), but the real story just has to be how the Canadian forms his army, but still finds time for friendly games of chess with the officer.

Coming up for me are Hugh Pendexter's novelette "No Man's Land," about Quantrill's Raiders; Raymond Spears' western story "The Nester;" Gordon Carroll's "story of the tanks" "The Gunner's Seat;" Andrew A Caffrey's "The Fishing Was Good;" another memoir from globetrotting soldier of fortune Rafael de Nogales, and the conclusion of Ared White's Napoleonic serial Monsieur Le Falcon. I really look forward to the Pendexter, but even if the rest aren't up to the standard set in the early pages this issue is still a treat already.

It was inexcusable of me not to credit this issue's sponsor: 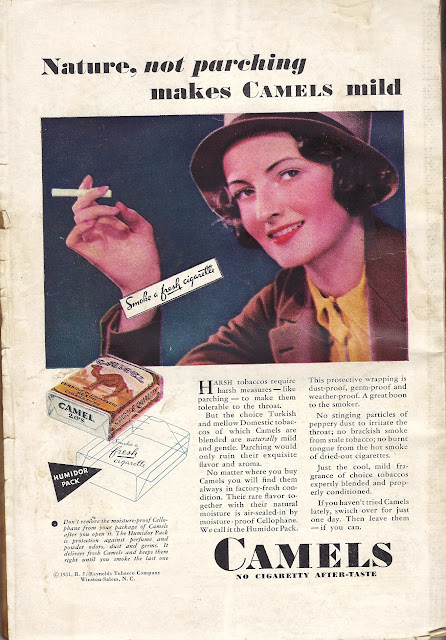 Posted by Samuel Wilson at 3:05 PM