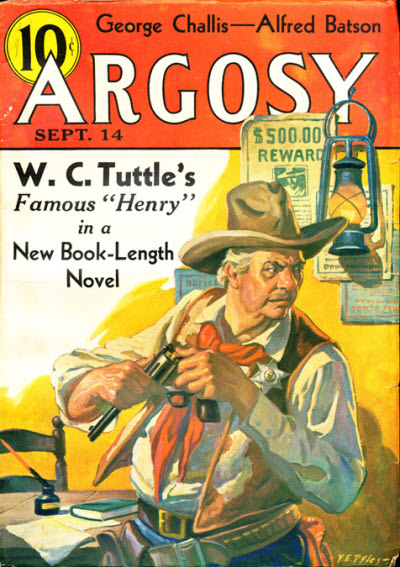 W. C. Tuttle's Henry Harrison Conroy had become "famous" in little more than six months. After making his debut in late February 1935, the vaudevillian turned rancher, sheriff and "Shame of Arizona" had appeared in two more Argosy novelettes before earning his first cover and first serial this issue. He looks a little more stalwart and rugged in V. E. Pyles' rendering, despite his paunch, than he'd look in his many subsequent cover appearances. The whole point of Henry was that he was a comical figure, blatantly Fieldsian, and thus never taken seriously by the criminals of the west whom he inevitably outwitted or simply defeated. Still, Henry had arrived and there was no disputing that. He probably got more Argosy covers over the remainder of the decade than any series character.

Sharing the bill with Henry is Frederick Faust in a dual role. In his most famous part, that of Max Brand, he concludes the serial The Sacred Valley. As George Challis, he presents the second installment of The Dew of Heaven. This serial features Challis's other swashbuckling character, the pirate Ivor Kildare -- Faust clearly liked that name -- to whom the author was returning after getting Tizzo the Firebrand out of the system. After having created the Challis alias for a 1926 Western Story serial, Faust revived it as a swashbuckling brand name with the original Ivor Kildare serial, 1934's The Naked Blade. For this issue's fourth serial, George F. Worts continues his eccentric adventure, The Gold Fist. If you want complete stories, the big one this time is Alfred Batson's "White Jade." This is grand brawling adventure in Asia. As the tag says, "When a Jap, a Chinese and an American all scheme for a fabulous stake, there's no telling the outcome." Throw in a deep-sea diving angle and "White Jade" is vintage pulp fun. You also get R. V. Gery's "The White-Haired Boy," in which an American ship captain gets embroiled in one of those Latin American revolutions, and Charles Newton Elliott's "Bighorn," which is about a mountain sheep, not a beef. It all adds up to another solid Argosy from one of the magazine's peak years.
Posted by Samuel Wilson at 3:24 PM