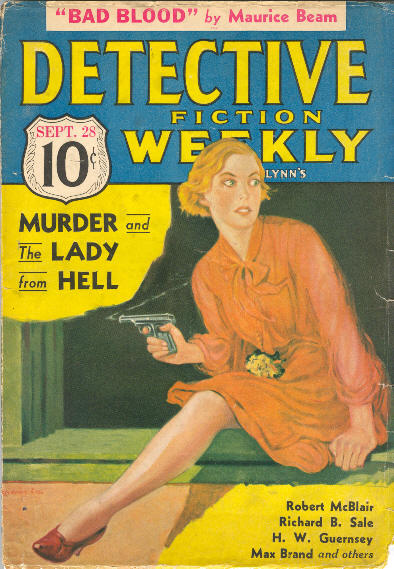 The Vivian Legrand story in this 1935 Detective Fiction Weekly is actually titled, "The Adventure of the Maharaja's Wife," but the cover editor knows how to sell his magazine. This is The Lady From Hell's first cover appearance since her debut in January, but it's Eugene Thomas's twelfth story about his antiheroine in that time. She'd get twelve more stories and three more covers over the next year. Apparently the Lady outranks Richard Sale's Daffy Dill, who stars in the novelette "Man Bites Dog" this week. The actual long story this time is Maurice Beam's "Bad Blood," which clocks in at 33 pages. Max Brand continues his serial Murder Me! while Ray Cummings resumes his sci-fi series "Crimes of the Year 2000." Short stories by H. W. Guernsey, Robert McBlair and David Redstone round out the issue, along with a "How Good A Detective Are You?" vignette by Richard Wormser. Looks like a pretty good lineup overall.
Posted by Samuel Wilson at 12:24 PM