VINTAGE PAPERBACK OF THE WEEK: Robert Carse, FROM THE SEA AND THE JUNGLE (1951) 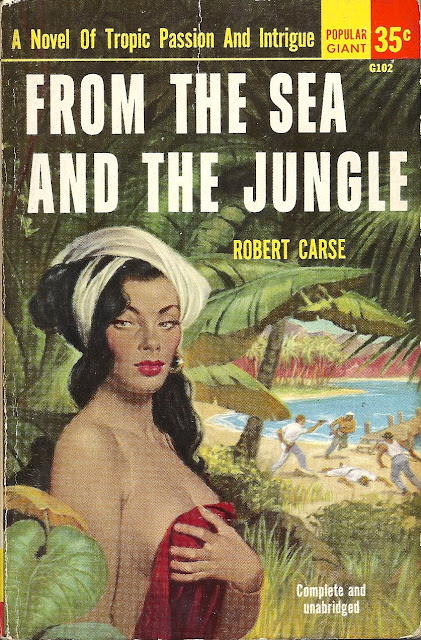 Robert Carse is one of my favorite pulp writers. He was very good at Foreign Legion stories and similar stuff, from Devil's Island or prison colony tales to the adventures of mercenaries in turbulent Latin America. One of his persistent interests was Haiti, the setting of such Argosy serials as The Drums Roar (1935) and Dark Thunder (1939), the latter in some ways the first hint of where Carse would go with From the Sea and the Jungle.  He was intrigued by the seemingly paradoxical notion of Nazi activity in Haiti, and by creating a fictional analogue for Haiti in the Republic of Macuta Carse freed himself to explore the paradox more deeply in the novel. It's stunning to see at least one admittedly light-skinned Macutan -- one with German blood as well -- take the Nazi side as war comes to the Western Hemisphere, but the deeper reality Carse portrays is a justified resentment of the United States for Americans' racist contempt for the Macutan government and its military. It's often easy to lose track of who the bad guys are in the novel, since Carse builds up a genuine Nazi German big bad by keeping him in the distant background, almost like a Kurtz figure the novel's hero must reach at the end of a nightmarish quest. While the Nazis wage submarine warfare on Atlantic shipping from a nearly inaccessible base, the Americans engineer a coup d'etat and assert their hegemony over Macuta in insultingly heavyhanded fashion. Most of the representatives of the American government or military are jerks, as Carse demonstrates in a scene where drunken soldiers pretty much wreck an elite Macutan club and humiliate the newly-elevated president and his wife. 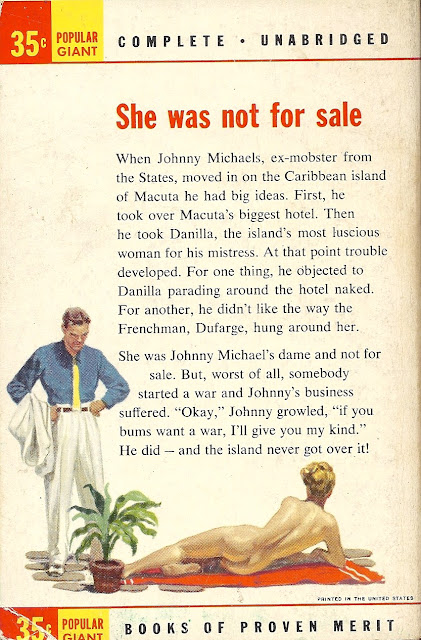 For all that, Carse's hero is an American in the Bogart mode. Johnny Michaels is a onetime small-time gangster, a rum-runner and gun-runner, who settled in Macuta and went legit by opening a popular hotel. The Nazi, Hans Ludig, was once Johnny's best friend in Macuta, apparently egging on his resentment of the U.S. while playing what Johnny belatedly recognizes as a long con on him. Johnny is no racist -- he recalls hankering after "high yaller girls" as a young man -- and is disgusted by the unthinking racism of most Americans he encounters. Inevitably, however, he must take his country's side even as the Americans continue to behave abominably toward Macuta. He must track down Ludig not so much for personal payback, even though he feels that Ludig had tricked him for years, as to avenge a young American sailor, the sole survivor of a ship torpedoed by a sub from Ludig's base, who eventually succumbs to the horrible burns he suffered in the attack, despite the best care of Johnny and his White Russian girlfriend Danila -- she's the naked lady on the back cover; the front portrays a sort of voudou priestess who's pretty much just a friend of Johnny's. Carse somewhat overplays the bonding of Johnny and the dying sailor, who apparently reminds Johnny of his younger, more innocent self, and the emotional impact of the sailor's death as the motivator for Johnny's quest to destroy Ludig. Having excelled at slam-bang action in the pulps, Carse falters when he tries to be introspective or retrospective in proper literary style. Reminiscences pop up at odd moments in the story but never quite make Johnny Michaels into the fully rounded character Carse wants him to be.

From the Sea and the Jungle is 347 pages in the 1952 Popular Library Giant paperback edition I own, and at times it was nearly as much a slog to get through as the one Johnny experiences after he escapes from a Macutan prison and embarks on his hunt for Hans Ludig. The novel spends too much time inside Johnny's head for its own good, but that's Carse trying to write an "adult" novel as much as a literary one. It can't quite be a fully adult novel in the sense we take for granted today; for Carse "muck" is the equivalent of Norman Mailer's "fug" from The Naked and the Dead, for instance. But despite Carse's limitations as a psychological novelist, the inherent tension of the political situation in Macuta holds the novel together until Carse goes into action mode on more familiar pulp terrain in the final third of the book. Prisons and prison break are his meat, and from the time Johnny is thrown into prison for helping some Macutan fliers flee the country (to fight for the Free French) the novel moves more briskly, even as Carse cuts away from the jungle action to the American debauch in the Macutan capital. Interestingly, Carse keeps his Nazi villain at a distance all the way to the end. Yes, Johnny finally faces his friend-turned foe, but Carse isn't interested in giving Ludig a big scene to either explain himself or expound on his Nazi evil. He's like a human MacGuffin, someone everyone wants to get but without intrinsic value as a character. I don't recall the poor man having a line of real dialogue in the whole book. I suppose that may be because, with the war over, Carse wasn't interested in writing anti-Nazi propaganda. A sort of permanent undeclared war between Macuta and the United States, papered over by a world war, is arguably his real subject, though Johnny Michaels' personal-redemption story -- he had thought himself soft, if not a coward, for giving up the gangster life, and he fears that his involvement in Macutan intrigues has alienated him from Danila -- finally overwhelms the social commentary. Carse leaves us with an unresolved paradox: Johnny is our hero for acting like a good American and stopping the Germans, but From the Sea and the Jungle may leave readers wondering what actually was good about being an American, or at least an American abroad. It's no great or even very good novel, but it is an often thought-provoking relic of the popular literature of World War II.
Posted by Samuel Wilson at 7:08 PM