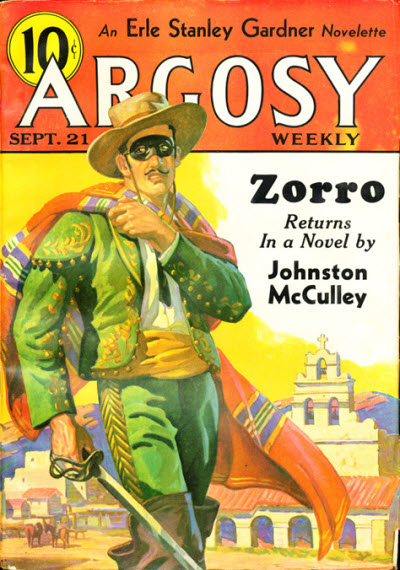 The topic of Tarzan's costume and hair color came up a few days ago, and now we're looking at an unusual looking Zorro from 1935. Johnston McCulley's masked man is one of the most famous products of pulp fiction, but he didn't really get too many covers, and in the few that exist, from the 191 All-Story Weekly heralding his first appearance in The Curse of Capistrano to this, his last cover, he never looked the same way twice. Our image of Zorro is formed by Douglas Fairbanks, Tyrone Power and Guy Williams, and it's the image of a man in black. However, I've never read Capistrano, so I can't say for certain what McCulley originally envisioned -- or, for that matter, whether V. E. Pyles' cover represented McCulley's vision for the two-parter Mysterious Don Miguel. Zorro would not reappear in pulp until 1941; during the interval there were variations of Zorro in Republic serials as well as the Tyrone Power film for 20th Century-Fox. When Argosy brought the hero back, it was a period when the venerable but tottering weekly eschewed cover paintings. McCulley then spent more than six years grinding out Zorro short stories on a nearly monthly basis for the Thrilling group's West, but while the hero was mentioned often on the covers, I don't think he was ever shown on one. After a while he wasn't even mentioned. By 1951 McCulley arguably had run Zorro into the ground, but he would live to see the character restored to fame through the good graces of the Walt Disney Studio. In any event, any clarification as to whether Zorro actually ever dressed this way would be appreciated.

Zorro is supported in this issue by W. C. Tuttle's Henry Harrison Conroy and George Challis's Ivor Kildare in continuing serials, and by Erle Stanley Gardner's Jax Bowman, a relatively short-lived character of his, in the novelette "Bunched Knuckles." George F. Worts wraps up The Gold Fist while Ellis Parker Butler and R. V. Gery contribute short stories, as does Edward Better in what's purportedly his only pulp story -- at least under that name. Better is probably more mysterious than Zorro now.
Posted by Samuel Wilson at 3:18 PM