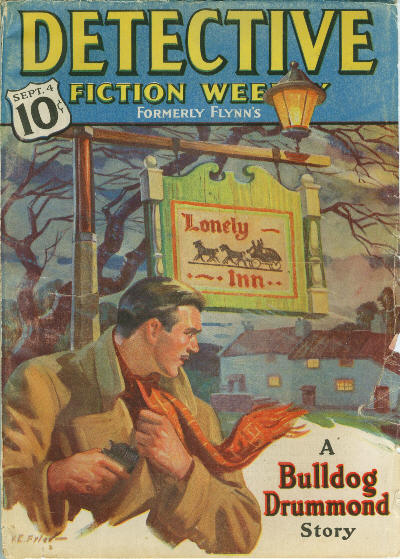 I was busy finishing a scan today (that I'll share with you tomorrow) so here's a perfunctory Calendar entry from 1937. The cover story, "Lonely Inn," was the first of three posthumous Bulldog Drummond stories Detective Fiction Weekly would publish over the remainder of the year. H. C. "Sapper" McNiele had died less than a month earlier, on August 14. Bulldog Drummond would carry on in print (thanks to an authorized successor to Sapper) and on film for years to come. Oddly, the remaining Sapper stories got no hype on the covers of the issues they appeared in. This issue also has novelettes by John K. Butler, Viola Brothers Shore and Roger Torrey, short stories by Wyatt Blassingame, Dale Clark and Cyril Plunkett, and the conclusion of William Edward Hayes' serial Kill the Umpire! These weren't DFW's biggest stars, but they were familiar names to regular readers of the time.
Posted by Samuel Wilson at 6:04 PM