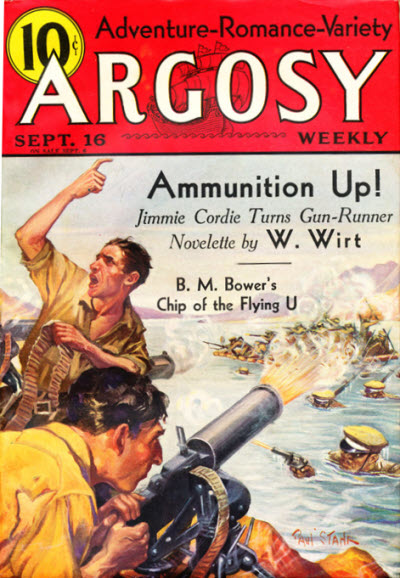 This 1933 cover tells us that W. Wirt's Jimmie Cordie has turned gun-runner as if we might be shocked at that development. Having read some of the Cordie stories it looks to me like another day at the office for the American soldier of fortune who wrought havoc in Asia with his little band of  scrappers during the first half of the 1930s. Some Argosy readers felt that Wirt went over the top with large scale violence, but there must have been an audience for this sort of Mongolian mayhem, or else Cordie wouldn't get the cover so often. I've always wondered about W. Wirt. The author never got a profile in "Men Who Make the Argosy," and I haven't found anything biographical about Wirt. That initial troubles me. Look at B. M. Bower, another of this issue's contributors. Bower was one of pulp's most popular western writers for a long time as the creator of the Flying U Ranch. As western fans now know, the B. stood for Bertha. She'd been writing Flying U stories since 1904, but "Law of the Flying U" was her Argosy debut. Largely forgotten now, Bower here appears alongside Max Brand (with part two of The White Indian) as a pulp peer. The other serials are by Fred MacIsaac (The Lost Land of Atzlan) and Herbert L. McNary (the baseball story The Diamond Specter). There's also a fantastic-sounding novelette, "The Black Sorceror," by Forrest Rosaire, who's "The Man Who Makes the Argosy" this week, as well as short stories by Charles Green and Douglas Leach. I've only just started a 1933 Argosy collection of my own but if 1934-35 is the pulp's peak, as I believe, the year before is probably pretty good, too.
Posted by Samuel Wilson at 12:29 PM