VINTAGE PAPERBACK OF THE WEEK: Mike Roscoe, ONE TEAR FOR MY GRAVE 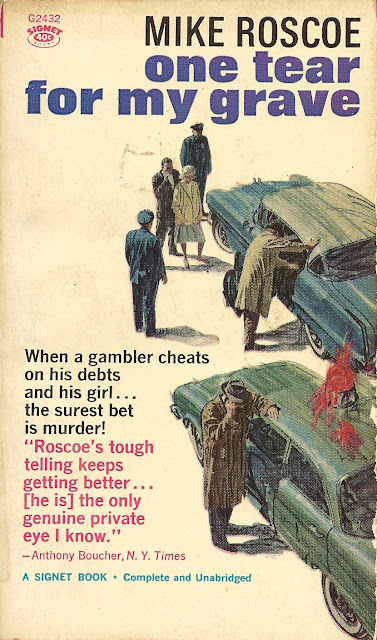 This is a 1964 third printing of a 1955 novel by an author whose name is almost too good to be true. It actually isn't true, but it's a composite incorporating a man who was named John Roscoe and who, along with writing partner Mike Ruso, worked as private detectives in Kansas City, where their fictional detective Johnny April would work as well. One Tear For My Grave is the fourth of five Johnny April novels that clearly have some continuity, as Johnny is several times over reminded of a beloved who died in an earlier story. "Mike Roscoe" writes in a staccato style of one-sentence paragraphs that I'd normally dismiss as "thrillerese" except that with these writer's it's clearly a stylistic decision -- or else one that helps this novel reach 141 pages. One Tear reads like a modern story in at least one respect. It opens with "The 23rd Hour" of the story, and then flashes back to the beginning before wrapping up with "The 24th Hour." The story proper begins with Johnny April being asked by a bookie to help him dispose of a body that's been dumped in his car. The bookie himself and his tough-cookie moll seem to be innocent but don't help their case by beating a hasty retreat when the police arrive. The corpse is a wealthy wastrel, engaged to the daughter of one of the city's elite families, who owed money to all Kansas City's biggest bookies, who themselves begin to get killed. Is April's bookie buddy Eddie Norris behind the murder wave, or is it Angelo Carbone, the richest and toughest of the bookies? Or is it a new mob muscling in? Under pressure from the cops, April calls in favors from the Chicago mob to get ahead of the conspiracy while getting possibly too close to Carbone's kept woman, described thusly on the back cover: 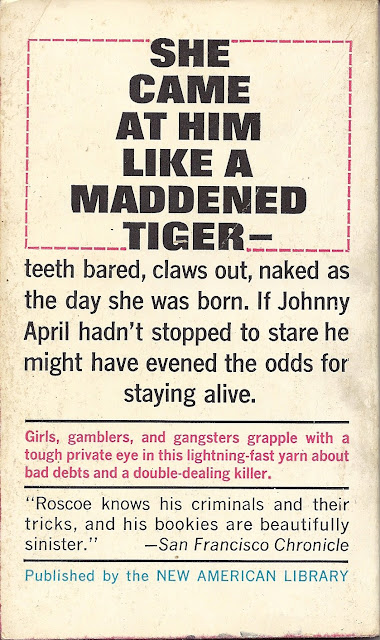 An interesting aspect of One Tear is the number of strong female characters in play. Eddie Norris's girl Nicky is a cool, resourceful customer, while Lola, Angie Carbone's mistress, is described on the teaser page as an "amorous amazon." The authors elaborate deeper inside:

A tall bimbo, black hair and skin as white as fresh milk, plenty of it showing and I wasn't missing an inch. This babe had more curves than a coke bottle and the way she was lying all sprawled out was enough to make any man hotter than a short-handle frying pan.

Lola's willing to go toe-to-toe with anyone, and if she can't outmuscle Johnny April she can outwit him with her body. Already subdued twice over, she gets the upper hand by flicking a lit cigarette into April's face and snatching his gun out of his holster. It's just about love at first sight. Mike Roscoe acknowledges, or believes, that underworld women have to be tough, but he also invests the bereaved fiancee of the initial murder victim with a steel will at the climax, when she seeks to be the killer's judge, jury and executioner.

The storylines of the female characters end up connected in important ways, and the mystery isn't resolved neatly. In fact, there's some hokey business with the heiress's stereotypically loyal Chinese servant (who knows "judo") that complicates things toward the end, and a denouement that doesn't come off as tragic as the authors want because the tragic character hasn't really been developed enough. But One Tear is an entertaining read and Roscoe's empathetic first-person style grows on you despite the genre cliches. You feel like you're getting to know Johnny April and by the time you're done you probably won't mind reading another of his adventures.
Posted by Samuel Wilson at 9:00 AM