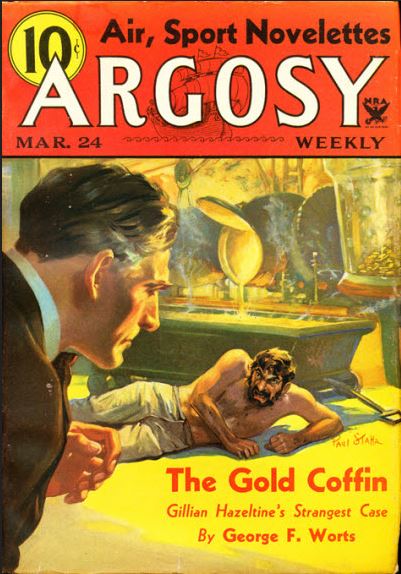 Here's another Argosy that's available at unz.org. I don't know if The Gold Coffin is, indeed, Gillian Hazeltine's strangest case, but having read one installment I'll concede that it is strange. The high concept is that a popular Hollywood actor, someone in the James Cagney-Clark Gable "caveman" mold -- he pushed an actress's face into a half-watermelon in one picture -- who made such a big hit playing a lawyer in another picture that he was admitted to the bar, asks to be hired by Hazeltine, for the moment still the nation's best known defense attorney -- the clock is ticking, though, for the first Perry Mason novel had been published recently -- as a publicity stunt designed to intimidate the studio that had been ripping him off to offer him a new contract appropriate to his studio-saving popularity. This guy is a regular Lon Chaney, as actors in pulp fiction usually are, making his entrance in weird old man disguise for no good reason. While Hazeltine can't figure out this (superficially) thuggish thespian's appeal to women -- both his wife and his secretary are smitten -- his own sensationalist impulses lead him to take the lad on. Then the story proper begins, which has something to do with a mean old miser who's hoarding gold in spite of FDR's order and hurting the already damaged U.S. economy. Unz doesn't have the other two installments, but I have the conclusion in my own collection, so maybe I'll let you know how it all turns out. For me the highlight of the issue is the ill-described "Air" novelette, Eustace L. Adams's "Hideaway Island." It has a scene in which characters in the story travel by airplane, but in fact it's a vigilante story of the sort then in vogue, in which a quartet of war veterans, the wealthiest of whom had received a kidnap threat, turn the tables on gangsters by kidnapping them and imprisoning them at the title location. For extra measure Adams hits the island with a hurricane. It's an okay story but really has too many heroes, with not enough personality, for its own good. Meanwhile, the rival kings of pulp, Max Brand and H. Bedford-Jones, each continue serials, Brand's Brother of the Cheyennes and HBJ's Jungle Girl, the latter really more about the man who finds the jungle girl and thus disappointing for anyone expecting a precursor to Sheena, Queen of the Jungle. The "Sports" novelette is Richard Howells Watkins's racing story "Dirty Driving," but since it's a sports story I skipped it. Wrapping up the lineup is William Merriam Rouses's story of the 19th century Adirondack wilderness, "The Witch of Silverwood," and another of John H. Thompson's series of shorts about his two tramps, Bill and Jim. From "Cappers" I learned that a capper is something like a shill, someone who pretends to win a big prize in a carnival game to entice others to play and lose. It's not a bad racket but Bill and Jim tend to screw up any racket they get involved in. Their misadventures are brief enough to amuse without growing annoying. This is a relatively weak issue from a peak Argosy year but when it's free reading you can find some things worth your while. Check it out through the link below to judge for yourselves: