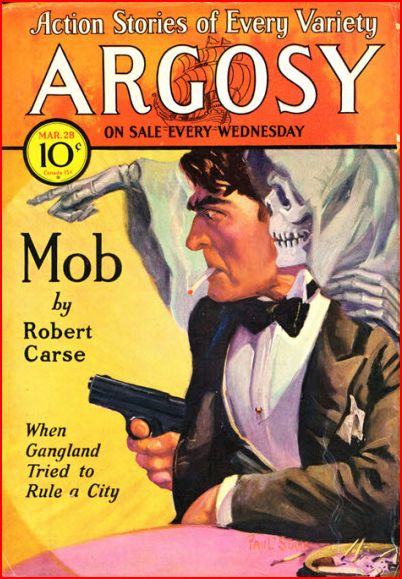 Robert Carse tries his hand at an American crime story in this 1931 Argosy, with Death pointing the way. Carse established his hard-boiled credentials writing Foreign Legion and Devil's Island type stories, so I'd guess he could pull off a gangster story with little trouble, while Paul Stahr's cover adds the appropriate atmosphere of doom. Meanwhile, I'm guessing W. Wirt's novelette "Jades and Afghans" is a Jimmie Cordie story, but as the Fiction Mags Index doesn't list it as such I can't be 100% certain. Along with Carse's two-part Mob, the serials this issue are Malcolm Wheeler-Nicholson's Battle of the Silent Men, which deals, according to last week's cover, with "War-Time Spies in a Grim Old French Chateau;" J. E. Grinstead's Barons of the Border; and the conclusion of Fred MacIsaac's fantastic The Hothouse World. William E. Barrett, C. A. Freeman and Herbert L. McNary contribute short stories. Apropos of Mob, a non-fiction filler describes "The First Racketeer," whoever that may have been.
Posted by Samuel Wilson at 12:00 AM