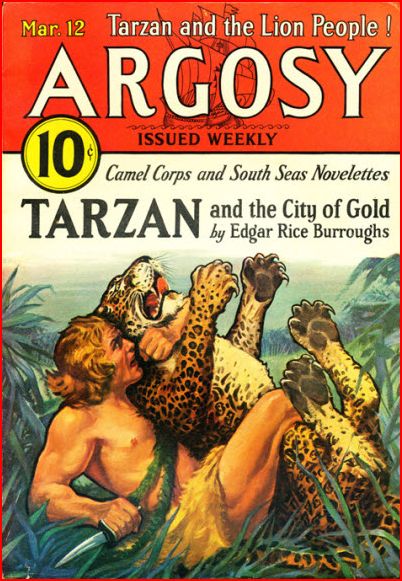 This 1932 Argosy marked Tarzan's return to the venerable weekly after eight years. Argosy, of course, was the sister publication and heir to the All-Story where the Ape Man made his very first appearance in 1912. For most of his history, Tarzan swung back and forth between the Munsey pulps (All-Story and Argosy) and the McCall story magazines, Blue Book and Red Book. Edgar Rice Burroughs presumably went with the highest bidder each time; he'd take Tarzan back to Blue Book later in 1932, and in 1933 the Ape Man would finally appear in a slick, that being Liberty. Tarzan would return to Argosy in 1936, 1938 and 1941. Burroughs placed a lot of other stories in the weekly in between.

I'm at a bit of a loss with the rest of the issue because the Fiction Mags Index doesn't know what's in it, and no one seems to be selling a copy with an interest in listing the contents. We can at least figure out the other serials by looking at the previous and subsequent issues. This number features part two of Thomson Burtis's Texas air serial, Soldiers of the Storm, and part four of F. V. W. Mason's Captain Renegade. A quick flurry of research revealed that sci-fi pioneer Murray Leinster has a story this week called "Nemesis." Beyond that, we have a "Camel Corps" novelette and a "South Seas" novelette. "Camel Corps" may mean Foreign Legion, and that may mean Robert Carse or J. D. Newsom, though if it were Georges Surdez I think they'd mention him on the cover. "South Seas" could well mean my man Bellow Bill Williams, but there were a lot of South Seas specialists. For now,the only way to find out may be to buy a copy, but with Tarzan on the cover it would definitely cost you.
Posted by Samuel Wilson at 12:00 AM