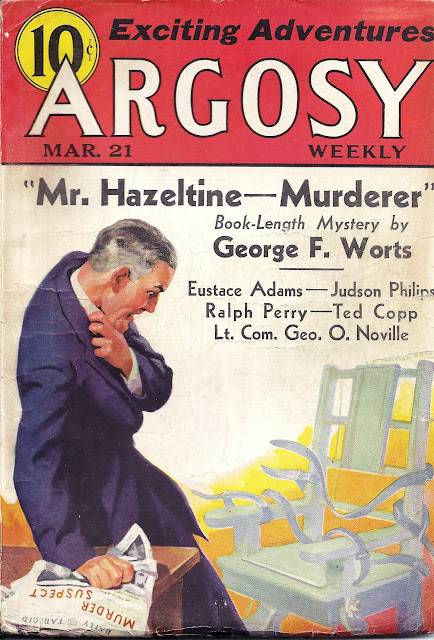 This 1936 Argosy comes from my personal collection. I acquired it because the Ralph R. Perry story advertised on the cover, "Shark Trail," is the last appearance of his tattooed pearler Bellow Bill Williams. I acquired this issue recently and haven't read the story yet. My habit is to read my pulps in chronological order, which means I have a way to go before I get to 1936, though I may jump ahead for the sake of Bellow Bill. This is a milestone issue for another reason: the cover story is the final appearance of George F. Worts' mystery-solving defense attorney Gillian Hazeltine, a Perry Mason precursor who'd been an Argosy star since 1929. I've read some Hazeltines and you can see why Mason, not he, became pop fiction's iconic lawyer. The Hazeltine stories I've read, which have a running subplot of his rivalry with a corrupt district attorney, are actually pretty dumb and not on the same level as Worts's Singapore Sammy stories. Worts was phasing himself out of Argosy in 1936. Having retired Peter the Brazen and his own Loring Brent alter ego the year before, Worts would follow Mr. Hazeltine -- Murderer with one more Singapore Sammy serial, and then it was on to the slicks. The other serials this week are Eustace L. Adams's Death Rides the Wind, which should be good stuff, Traitor's Shadow, a Revolutionary War story by John Wilstach, whose other specialty was circus stories, and Ted Copp's The Wildcatter. Wilstach and Copp are authors I haven't read yet but I have some of Wilstach's stuff in my 1935 pile, so I should have an opinion of him soon. Serials of a sort are Judson P. Philips's series of sports stories set at Madison Square Garden and George O. Norville's White Adventure, a longform non-fiction account of an Antarctic expedition co-written with up-and-coming pulpster T.C. McClary. Perry's novelette is the only real stand-alone story in the entire issue, but it was reason enough for me to get it. The extra serials (there were only two at a time a year earlier) make 1936 Argosies more of a chore to collect but with the magazine still arguably at its peak they're probably worth the trouble. This particular issue is sponsored by: 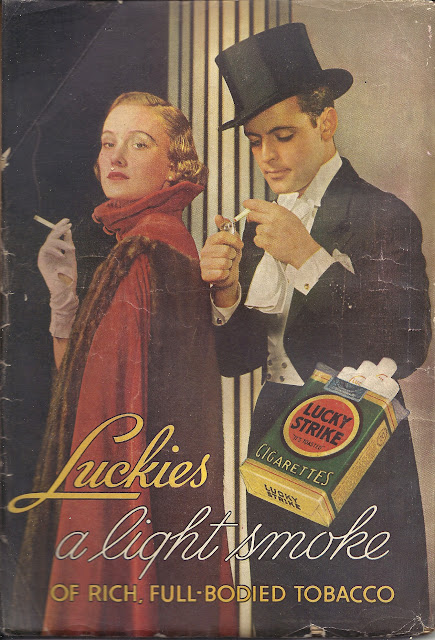