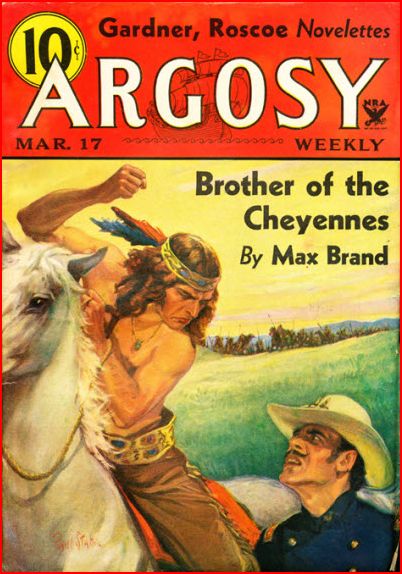 There's nothing Irish to offer this St. Patrick's Day, because what was a pulp going to do? Put a leprechaun on the cover? I suppose I am surprised that there seems to be no Irish content at all in this 1934 Argosy. Instead, we have two Frederick Faust serials, the new one being our cover feature, written under Faust's more familiar "Max Brand" handle, while the "George Challis" swashbuckler The Naked Blade wraps up. H. Bedford-Jones could go nuts with the pseudonyms, too, but over at Argosy he usually restricted himself, or was restricted, to one story, under his own name, per issue. This issue's contribution is the second installment of his serial Jungle Girl. But from her cowering appearance on the previous issue's cover, Sheena this probably ain't. Erle Stanley Gardner resumes a desultory series about a character named Major Brane: "The Ivory Casket" is the last of seven stories over a roughly three-year period, most of them appearing in 1932. Theodore Roscoe's novelette, "Article 246," has something to do with the military, I guess. Tom Curry, a good writer, contributes a short story, "Bum Steer," while Foster-Harris and Thomas Thursday, from the titles of their stories, probably were attempting humor of some kind. This issue seems to be unusual in that cartoonist Stookie Allen got to do two of his "Men of Daring" features, though one of them, as was sometimes the case, is a "Woman of Daring." Just another week from one of Argosy's peak years.
Posted by Samuel Wilson at 12:00 AM