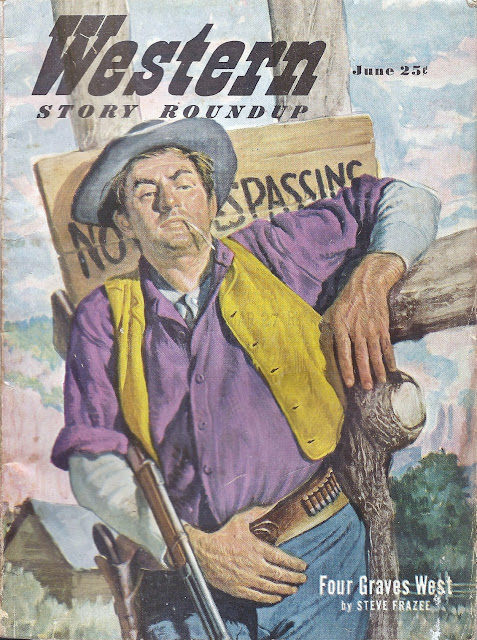 After Street & Smith's venerable Western Story pulp folded in 1949, Popular Publications eventually acquired the rights to the title and revived it at the tail-end of the pulp era. Before that, Popular tried out a slightly different title, Western Story Roundup, for three issues in 1951. Picking up the numbering from All Story Western -- this third and final issue is technically Volume 4, No. 2 -- Roundup was one of several titles, including Adventure and Black Mask, with which Popular tried a new format that was smaller than the standard pulp but larger than the increasingly popular digests that would inherit pulp's kingdom. Popular went ad-free on these titles and kept interior illustration to the barest minimum. The final issue of Roundup was the most reprint-heavy of the three; six of its nine stories had appeared before, though the cover story by top-hand author Steve Frazee was an original. While Roundup didn't survive, the other titles reverted to full-scale pulp for the time they had left, while the last of all pulps, the Thrilling group's Ranch Romances, would adopt this format in its sad last years. Popular would revive Western Story Roundup in 1955 during its last-gasp attempt to maintain a line of fiction mags in the more conventional magazine format Adventure had adopted in 1953. Taking over the numbering of Rangeland Romances, Roundup and  Fifteen Western Tales ended with the year 1955, marking the end of Popular's once-mighty western magazine line. As for this issue, the Frazee story is good and I'll leave the rest for you to judge for yourselves. The complete issue is available in scanned form for download from the link below.