VINTAGE PAPERBACK OF THE WEEK: George Bagby, GIVE THE LITTLE CORPSE A GREAT BIG HAND (1953) 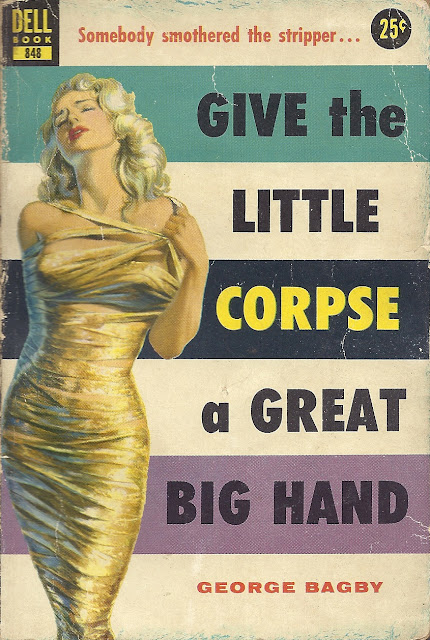 That's a cute cover by Victor Kalin. The back cover copy tops it. I don't think they write them like that anymore. 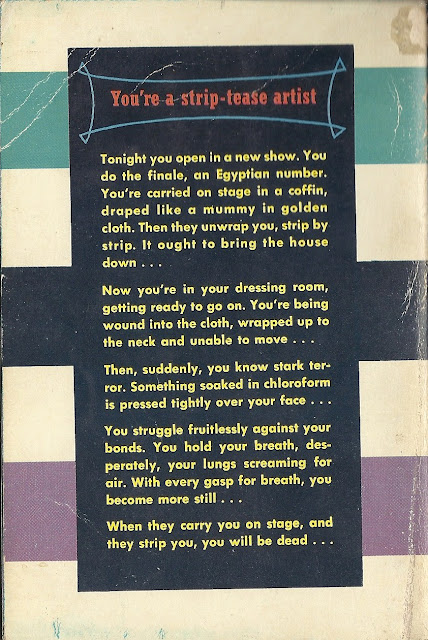 George Bagby was one of the several pseudonyms used by Aaron Marc Stein (1906-1985). Bagby was his most prolific alias and a character in his own stories, the narrator of the exploits of his friend "Schmitty," or Inspector Schmidt of the NYPD. Give the Little Corpse a Great Big Hand is the first Bagby/Schmidt book I've read and it was quite enjoyable in an easy, undemanding way. In this one, Schmitty has two mysteries to solve: the smothering of the stripper and a burglary spree coincidental with the opening of the nightclub where the stripper is smothered. We're dealing with that old crime chestnut where a gangster attracts high society to some big event so his boys can rob their homes while they're out. You may ask why high society has come out to see a stripper, but the gangster has hired a singer -- a policeman's daughter, even, and with real talent -- to give the occasion class. Since the nightclub's new proprietor is a known gangster, there's little mystery to the burglaries. The overriding mystery is whether the killing of the stripper has anything to do with the burglary plot. Schmidt doesn't think so; the gangster's response to the stripper's sudden death is too spontaneous, too panicked, to be part of a planned alibi. The murder investigation brings out a high-society rivalry for the singer's affections and the stripper's dysfunctional relationship with her alky mom, now her daughter's maid and dresser. The old lady seems to be one step ahead of everyone else until she gets killed, too. Her death keeps the mystery plot fresh, but the writing is good enough to make this an entertaining page-turner. There's a certain ruefulness to Bagby's descriptions that retains enough sentiment not to be world-weary or cynical, and on this first evidence for me he can write quite the opening paragraph. This one describes the venue for the story:

If you ask around in Time Square, at Lindy's and at Sardi's and around the Astor lobby, you'll turn up people who may remember it when it was the Limehouse Club. It's been so many things since then, the Lotus Bud and the Northern Lights and the Foreign Legion. The Broadway boys will tell you it's a bad-luck spot. The location and the layout are beautiful, but the history is bad. It goes all the way back to early Prohibition days and there's always been one night club or another there, but none of them has lasted. Whatever the name under which it operates, it is always the place where the angels go to have their wings clipped, but mysteriously there are always fresh angels. Each failure, each shutdown, each collapse is invariably followed by another hopeful venture. A change of name, a change of management, a change of decor, but never any basic change in the same old gilded dump.

The whole first chapter is great, from its efficient introduction of the cast to Bagby's descriptions of a glorified burlesque show playing to a too-hip crowd that finds the gross comic ironically and thus unintentionally funny. "It takes a special sort of mind to be amused by a confusion between Pharaoh and fairy," narrator Bagby observes, and while the audience isn't that special they find the climactic striptease -- the stripper makes it through the first performance -- hilarious in an obviously camp way. I appreciate that kind of sociocultural observation just about as much as the mysteries in such books. Since the other Bagby book in my collection, The Real Gone Goose, deals with beatniks, I look forward to enjoying it, whether the humor is intentional or not.
Posted by Samuel Wilson at 4:13 PM