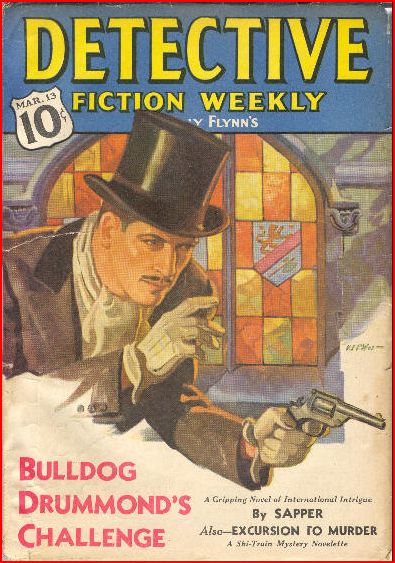 If that's Bulldog Drummond on the cover of this 1937 Detective Fiction Weekly, he's a lot more handsome than his creator, H.C. "Sapper" McNeile described him. But so were Ray Milland and John Howard, the actors who played Drummond in a series of Paramount B-movies at the time this issue was published.  DFW had last published a Bulldog Drummond serial in 1929, perhaps to exploit the Ronald Colman movie of that year. After McNeile's death later this year, DFW would publish three Drummond short stories, followed by Gerard Fairlie's continuation of the series the following year. On the evidence of this first installment you probably won't get the kind of exuberant outrageousness I recall from the original Drummond novel. While the Drummond serial clearly was meant to be this number's highlight, for me the highlight was -- was since this issue has been scanned and is available online --  the Foreign Legion mystery by the dependable Robert Carse. Nothing else really impressed me, though fans of Ray Cummings, Frederick C. Davis and Fred MacIsaac may want to download this issue.
Posted by Samuel Wilson at 12:00 AM