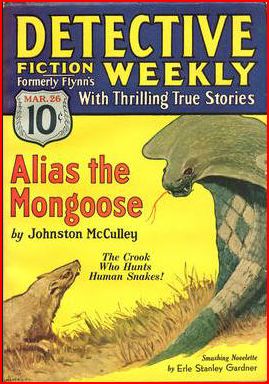 Cover artist Lejaren Hiller does Johnston McCulley no favors in this 1932 issue of Detective Fiction Weekly. McCulley was trying to put over a new series character, and it's not a bad hook; his hero is The Mongoose because he hunts human snakes. So Hiller gives us a real snake and a tiny animal avatar of our new hero in the lower left hand corner. McCulley was persistent, however. The Mongoose had eight more adventures between now and May 1933, but he never got a crack at the cover again. Meanwhile, Erle Stanley Gardner plugs on with one of his series characters in a "Smashing" novelette. He'd created Senor Arnaz de Lobo in July 1930. "Barking Dogs" was the character's tenth appearance in DFW; he'd appear thirteen more times until Gardner gave up in October 1934. Garnett Radcliffe continues a serial, "The Prisoners in the Wall," which from the cover of its debut issue appears to have something to do with an ape. William Corcoran and Robert E. Pinkerton contribute short stories. McCulley and Gardner were prolific pulpsters remembered today entirely for one character apiece of the multitudes they created. Searching for Calendar entries reminds me how diversely prolific both men were.
Posted by Samuel Wilson at 12:00 AM