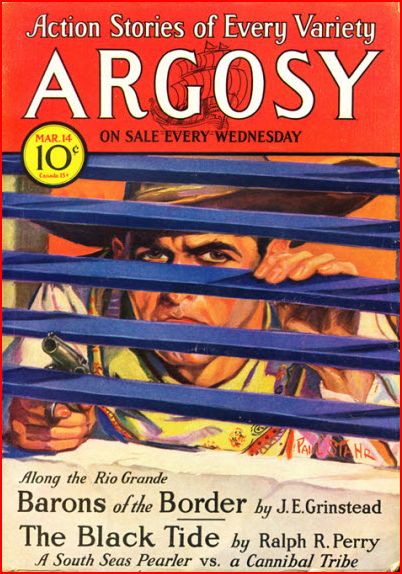 Here's another mystery issue of Argosy, this time from 1931. What we can tell for certain is that Barons of the Border is a five-part serial by an old-timer and apparent latecomer to pulp. Grimstead was born in 1866, according to Fiction Mags Index, and didn't publish his first story until 1918. Wikipedia reveals that he was a journalist and politician before then, and took up fiction after retiring from public life.  We also know about this issue that it contains the second installment, of three, of F. V. W. Mason's serial The Tiger of Phnom Ka, and the fifth installment, of six, of Fred MacIsaac's The Hothouse World, which on the evidence of the February 21 issue which heralded its debut has something to do with homunculi or shrinking people. What we can guess easily enough is that "The Black Tide," a Ralph R. Perry story about "A South Seas Pearler," is an adventure of our old friend Bellow Bill Williams which I will add to the preliminary checklist of a few weeks ago. In addition to this data, a bookseller offering this issue in Rhode Island lists the following stories: "Parole" by Jack Allman;  "Red Death" by Norman H. White Jr.; "Ray Martin, Oyster Pirate" by Bertrand L. Shurtleff; as well as contributors William Merriam Rouse, Allan K. Echols, John H. Spicer, E. R. McCarthy and Addie Gates. Some of these probably contributed the little non-fiction fillers on the last pages of stories.  On top of that, I like the cover gimmick Paul Stahr came up with; it catches your eye while obscuring your view. Nice work.
Posted by Samuel Wilson at 12:00 AM