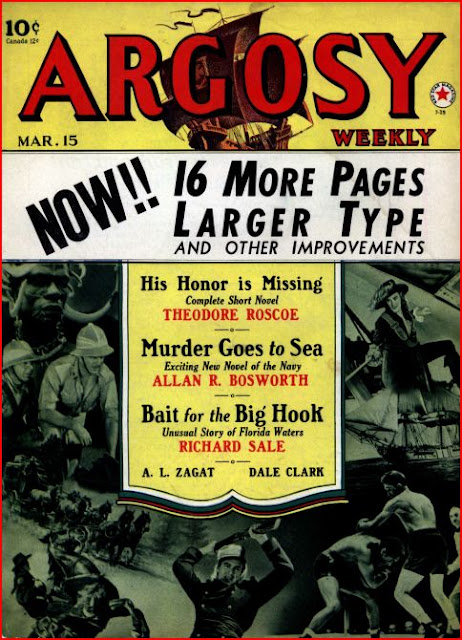 The Munsey company tried to tell people that they made changes to Argosy, less than two months after their big revamp, in response to an enthusiastic fan reaction. To recap, in January Argosy had changed from pulp to "bedsheet," larger in height and width but thinner in page count, each story page a triple-columned wall of tiny type. As of this week, the rotten cover collage is still the same, but inside are 66 double-columned story pages. The foremost of the "other improvements" announced on the cover, which somehow looks more than ever like a box of cereal or laundry detergent, is that stories will no longer jump to the back of the book, as they had since the January revamp. It must have surprised the Munsey people that readers didn't like that innovation. After all, the slicks did that all the time, and wasn't Argosy virtually a slick now? Alas, in 1941 the Argosy crew seemed anything but slick operators, and the year still has a couple more revamps to go. 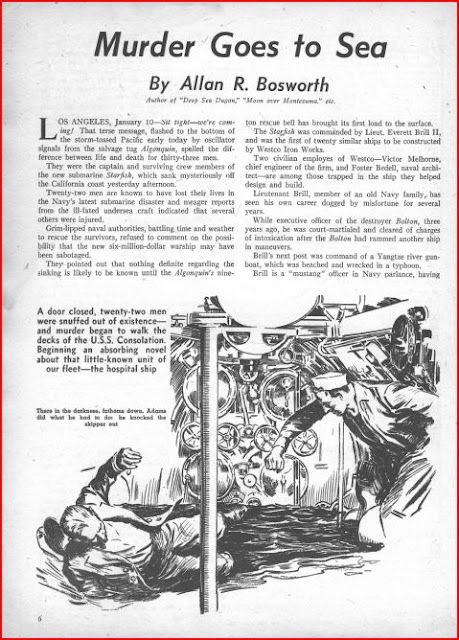 This re-revamped issue has three serials, two short stories and a "short novel" by Theodore Roscoe. The new serial is Murder Goes to Sea by Allan R. Bosworth, who mostly worked for Street & Smith's westerns but had recently published a serial in the Saturday Evening Post. It's a murder mystery on board a Navy hospital ship, one of the protagonists being a Navy brat who, being female, can only carry on her family's tradition by serving as a nurse. But it looks like her boyfriend will be doing the detective work after a sailor who could have incriminated his commanding officer gets his skull smashed in his hospital bed. I don't read pulp for whodunits so this one, not awful, still left me cold. The first installments of Jack Byrne's Gunswift appeared in issues I haven't read, so I can't really comment on it. I definitely can comment on Long Road to Tomorrow, the return of Arthur Leo Zagat's Dikar and the Bunch. Zagat's Tomorrow series, starting in 1939, imagined the conquest of the U.S. by the "Asafrics," the Yellow Peril teamed up with mostly foreign black soldiers. The series was criticized as racist by at least one "Argonotes" letter writer -- the Bunch, a group of child refugees who've grown up as noble savages on an inaccessible mountain since the conquest, are all whites -- and Zagat tried to cover himself by introducing a heroic black character, a spy for the American resistance who's infiltrated a prison camp -- in a 1940 story. With Long Road we're back to pure race war, though to be fair Zagat never has the Bunch or the resistance claim to be fighting for the white race. It's just telling that at a time when the Nazis were on the rampage, Zagat imagines a nonwhite invasion reducing the U.S. to slavery. You choice of doomsday scenarios says something about you, I suspect. In any event, Zagat introduces a new wrinkle this time by giving us excerpts from an after-the-fact History of the Asiatic-African World Hegemony by one Zafir Uscudan, published in Bombay and Singapore, apparently an admiring account from a non-white perspective of Dikar's exploits. But as Dikar has been introduced to modern weapons and strategies, the story has lost much of its postapocalyptic noble-savage vibe and becomes a guerilla warfare tale with slightly peculiar dialogue from the still somewhat childish members of the Bunch. 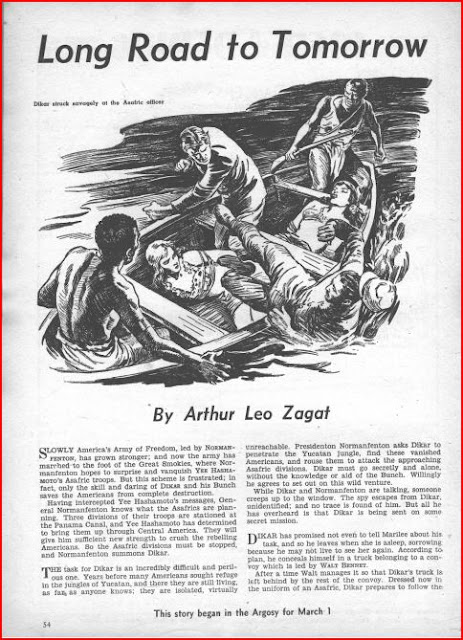 Roscoe's "His Honor is Missing" might have taken place in his mythical town of Five Corners, but claims to be based on Binghamton NY history. It's basically a "ghost breaker" sort of story, or Scooby-Doo for grown-ups, though Roscoe ends his haunted house adventure on an ambiguous note, theoretically offering rational explanations for all the frights while leaving the possibility of supernatural truth open. Paul Ernst's "Patrioteer" is a short-short story about a hero who refuses to kiss the flag when local bullies try to compel him, but keeps a true patriotic relic in his car. Perhaps atypically for a pulp story, it ends with the beaten-down hero resisting temptation to avenge himself on the bullies, out of reverence for what his own flag stands for. Richard Sale's "Bait for the Big Hook" is a silly story about a fisherman who literally reels a Nazi out of the ocean.

This issue definitely was easier to read, especially on my e-reader, but there wasn't really anything outstanding to read. That problem was becoming all too common for Argosy in 1941, though on previous occasions I've found at least one proper pulp story to commend. Zagat's reprehensible fantasy might at least be expected to be a wild read, but it only feels tired. Maybe that was more common in pulps that year than I realize, but Argosy often seemed more tired than the others.
Posted by Samuel Wilson at 8:29 PM

Email ThisBlogThis!Share to TwitterShare to FacebookShare to Pinterest
Labels: Argosy