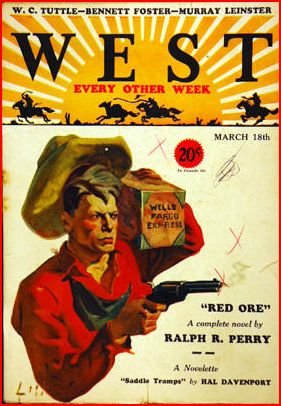 West was published originally by the same people who put out Short Stories, Doubleday, Page & Co., and like Short Stories it came out twice a month at first. West must have been a hit, because after about a year and a half it was promoted to weekly in the summer of 1927, putting it in direct competition with Street & Smith's Western Story. It only stayed weekly for little more than a year, reverting to twice a month in November 1928. It slowed to once a month late in 1932. Doubleday sold West in 1935, and in 1938 it ended up with Ned Pines' Thrilling group, where it continued until on a bimonthly schedule until most of the Thrilling westerns were cancelled at the end of 1953. This is a 1931 issue sporting West's snazzy setting-sun cover device, its answer to Short Stories' red sun motif until West revamped its cover design in 1932. Bellow Bill Williams creator Ralph R. Perry has the lead novelette this issue. He'd been a regular contributor to West in its early days, but this was his first story for them since the fall of 1928. Perry finished his pulp career writing westerns, his last appearing in the last issue of Thrilling's Popular Western for November 1953. Also in this issue, W. C. Tuttle introduces what I presume to be another comic mystery solving team, but Terry McCune and Howdy Hepburn must not have gone over. Tuttle published four stories in three years, then revived the characters once more for a single outing in 1944. Murray Leinster, best known today for his science fiction, continues the serial Dead Man's Shoes while Bennett Foster, a decent writer, places a short story, "The Jurisdiction of Colonel Colt." The other contributors are unknown to me, but it looks like West as a rule published the "top hand" western writers of the day, with the conspicuous exception of Max Brand. I've never read an issue of West from its glory days, but I'd guess it would be good reading.
Posted by Samuel Wilson at 12:00 AM