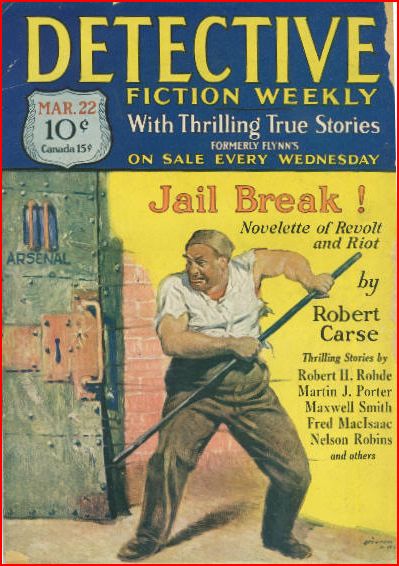 Jail break, eh? I don't know, but I just don't like this guy's chances. I see what he's trying to do but by modern standards Lejaren Hiller's convict just doesn't look formidable or badass enough. However, I like the chances of Robert Carse's cover story being good stuff, since Carse was a badass writer who did "revolt and riot" pretty well.  The only series character this issue is Robert H. Rohde's Reggie Chivers, the "Red Duke," who made his debut the year before. "Out From Under" was the 11th Chivers story in less than a year, but the character wouldn't appear again until August 1931, if the Fiction Mags Index can be relied on. The only other author I know from this week is Fred MacIsaac, who continues his serial Heirs of Murder. Edwin C. Stengelsen's sole pulp credit, the story "The Rowboat Pilot," appears in this issue, but a onetime author could just as easily be one of this issue's established contributors using a pseudonym for a second story. As a reminder to watch out when initials substitute for names, M.E. Chase, author of "Condemned by the Text," is Mary Ellen Chase, an English professor at Smith College making her only Detective Fiction Weekly appearance after a run of Argosy stories in 1927. Of Maxwell Smith, author of "Cold," I have nothing to say except that he was a busy detective story writer of the period. And in the end, I guess I wish that poor con with his paper hat and his torn shirt and his pipe or rod a litlle luck crashing out.
Posted by Samuel Wilson at 12:00 AM