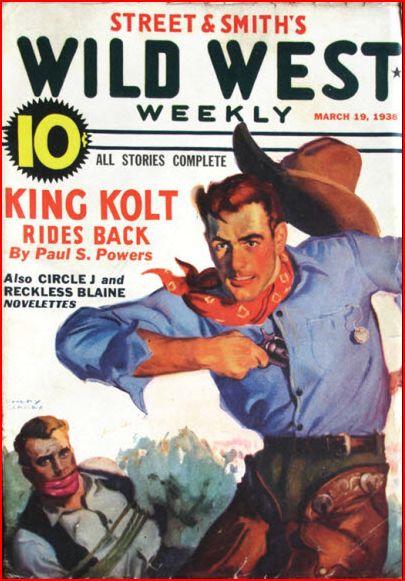 You'd think that Paul S. Powers's King Kolt was one of the regular stars of Wild West Weekly given how this 1938 cover hypes him, but according to the Fiction Mags Index this was only the character's second appearance, and the first was in November 1935. This cover may have been an attempt to turn Kolt into a major character, for he would return just one month later. But then he wouldn't show up again until the summer of 1939, and after that not again until 1942. That proved to be Kolt's busiest year, with four stories in the weekly, followed by one more after it had gone biweekly in 1943. Kolt was a rare character that Powers got to take credit for under his own name, as he spent most of his time for Wild West Weekly writing the adventures of Sonny Tabor and Kid Wolf under the house name of Ward M. Stevens. Other familiar characters this issue include, in order of seniority, Billy West of the Circle J, The Whistlin' Kid and Shorty Masters, while a six-part Reckless Blaine series continues, as does a 20-past comics series about Maverick Wade. Frank Carl Young gets to write a stand-alone story, "Outlaw's Hand." I still haven't read a Wild West Weekly, so I'll leave any appraisal to those who have.
Posted by Samuel Wilson at 12:00 AM