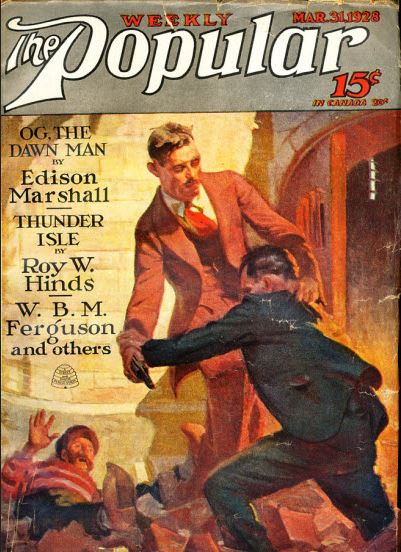 For slightly less than a year Street & Smith went head to head with Argosy by publishing a general-interest weekly pulp to go with its western, detective and romance weeklies. The Popular actually had been around since 1903, starting as a monthly before going twice-a-month in the fall of 1909. In the fall of 1927 Street & Smith made The Popular a weekly, starting with the October 1 issue. The experiment lasted until the end of June 1928. It reverted to twice-a-month until early 1931, when it became monthly. It merged with the company's twice-a-month Complete Stories later that year. It would be odd if Jerome Rozen's  cover illustrated Edison Marshall's serial Og the Dawn Man because that story actually started in the previous week's issue. Marshall's the only author this issue that I've heard of, and I know him mainly because the 1958 movie The Vikings is based on one of his books. I also see an occasional copy of one of his novels among the vintage paperbacks in local bookstores. My ignorance of one of the authors, William Hemmingway, is excused by the discovery that, with one exception, he wrote exclusively for The Popular. You got two serials per issue with The Popular, the second this time being the conclusion of W. B. M. Ferguson's The Reckoning, which could have been about anything with that title. There's a series character in Howard Fitzalan's Leguerre of the Lost Division, who was appearing on an almost weekly basis despite the author (real name George Bronson-Howard according to the Fiction Mags Index) being dead since 1922. Roy W. Hinds, James Anthony Murphy and William Slavens McNutt round out the lineup. I leave it to those with experience to say whether any of them was any good.
Posted by Samuel Wilson at 12:00 AM