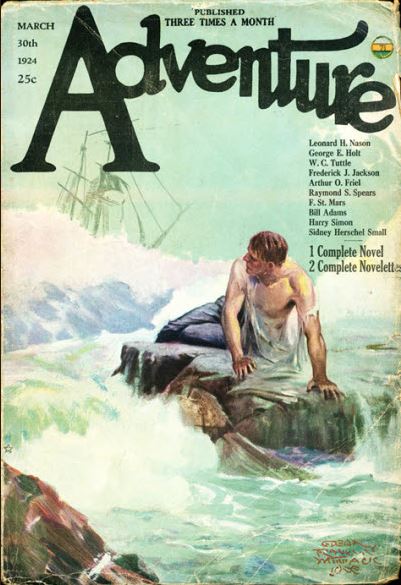 The 30th of the month brings us back to Adventure in the first half of the 1920s, when the magazine was coming out thrice monthly.The stars of this 1924 issue are W. C. Tuttle, who contributes another tale of his fan-favorite mystery-solving cowboy Hashknife Hartley, and Arthur O. Friel, who continues his epic serial The King of No Man's Land. I've read the next installment in the April 10 issue and it is mighty storytelling.
Two authors  I like a lot, Sidney Herschel Small and Leonard H. Nason, have stories this number. Nason's specialties, based on what I've read of him, were hardboiled World War I stories and cynical historical tales. His 1925 serial The Bold Dragoon is a classic picaresque adventure I highly recommend. Frequent contributor Gordon MacCreagh has a non-fiction piece in this one, while George E. Holt, Frederick J. Jackson, Harry Simon, Raymond S. Spears and F. St. Mars round out the fiction contingent. There are some decent writers here, obviously, but this issue is really just an appetizer for the April 10, 1924 issue, which may be the best single issue of a pulp I've ever read. Mark your calendar for that.
Posted by Samuel Wilson at 12:00 AM