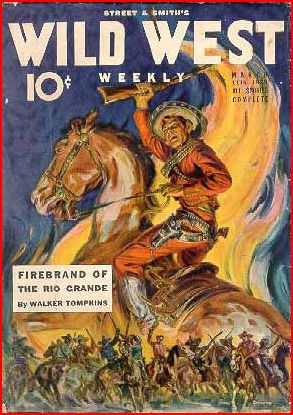 There's something cool, in some sense of the word, to Street & Smith's 1939 pulp covers, something at odds with the circus-poster quality of some pulps. Norman Saunders's cover for this Wild West Weekly isn't exactly cool in the minimalist manner of many '39 covers, but it's vividly striking in its own way, and once again keeping the cover copy to a minimum only helps the art do its work. Regular readers of this more junior mag (compared to Western Story) would find mostly familiar faces, though Walker Tompkins' Firebrand (no relation to George Challis's Tizzo) was a new character. He'd appear in the next five issues, but the Fiction Mags Index doesn't consider the Firebrand saga a serial. The only non-series character story this issue is Ralph Yergen's "Pardner of the Wild Trails," but the recurring characters presumably were Wild West's calling card. Other western pulps had series characters -- what author wouldn't want that sort of meal ticket? -- but they defined Wild West Weekly more than any other.
Posted by Samuel Wilson at 12:00 AM