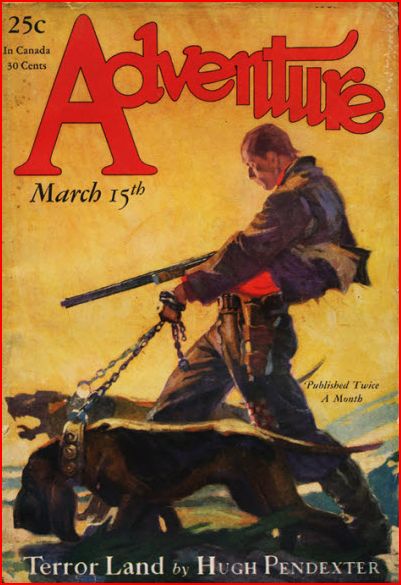 Dominic Cammerota did this menacing cover for a 1928 issue of Adventure. Hugh Pendexter, the cover author, mainly wrote westerns and earlier historical tales. He's probably the biggest Adventure star in this particular issue, though F. R. Buckley was a more enduring writer for the magazine. Buckely began his series about the Rensaissance adventurer Luigi Caradosso in 1924 and continued it almost to the end of Adventure's existence as a pulp, publishing the last story in the series in March 1953. Among western writers Alan LeMay is a bigger name than Pendexter's today thanks to his authorship of The Searchers, but this issue finds him in humorous mode, continuing a series of stories about his comic hero Bug-Eye. Frank Richardson Pierce, Tom Curry, Charles Tenney Jackson and Malcolm Wheeler-Nicholson are all solid writers with stories in this issue, while William McCleod Raine (continuing a serial) and Raymond S. Spears were revered western writers. I haven't read enough from William Corcoran or Edward L. McKenna to form opinions on them. For an issue without the real heavy hitters of Adventure (Lamb, Mundy, Surdez, etc.) it's actually a fairly impressive lineup and that cover practically sells the issue itself.
Posted by Samuel Wilson at 12:00 AM