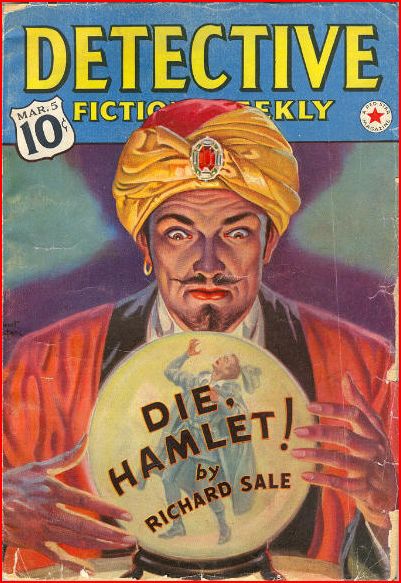 Detective Fiction Weekly seems to have reached its aesthetic peak of cover design around 1938. Here's an eye-catcher with an admirable minimum of cover copy. Richard Sale's "Die, Hamlet!" is one of his Daffy Dill stories; the other series character in this issue is Edgar Franklin's George Batey, who first appeared in 1931 but didn't return until nearly five years later. Seven more Batey stories appeared over the next two years, the last in December 1938. Regulars Cleve F. Adams, Dale Clark, Frederick C. Davis, and Samuel Taylor put in appearances as well. If it had Judson Philips it would have been as nearly generic an issue of DFW as you could ask for, but that cover on a newstand would look pretty tempting.
Posted by Samuel Wilson at 12:00 AM