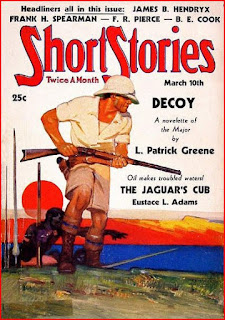 Back on March 10 when I put a 1935 issue of Short Stories on the Pulp Calendar, I remarked that Frank Richardson Pierce's "Snatchers" was one of the few stories from that issue, readily available at unz.org, that I hadn't read. I've now rectified that omission. "Snatchers" was one in a series Pierce did for Short Stories about the heroic film actor Stan Dvorak. The Fiction Mags Index lists only "Snatchers" and a two-part serial from the following month as Dvorak stories, but Short Stories itself indicates that there were stories before "Snatchers." Perhaps inspired by The Spider, Pierce conceived Dvorak pretty much as Lon Chaney, Detective, with the added gimmick that Dvorak was only the nom de film of bland, handsome socialite John Stanley. Because his employer, the Para-Art studio, made sure that no photos existed of "Dvorak" out of makeup, Stanley could move freely in public and use his quick-change makeup skills, which extend in Chaney style to physical contortion, to solve mysteries and fight crime.

The movie milieu might seem a change of pace for Pierce, who's best know to me, at least, for westerns and northwesterns. But I recall that one of his most popular creations, the Yukon sourdough No-Shirt McGee, acted as a technical advisor for a movie production in one of his earliest appearances (the Arogsy two-part serial Sable, 1937), and subsequently spent a lot of time in the neighborhood of Hollywood. Anyway, "Snatchers" is a topical tale of kidnappers, that kind of crime having become more notorious if not more common in the early 1930s thanks to the kidnapping and killing of the Lindbergh baby, the exploits of Machine-Gun Kelly, etc. In the story, "Snatchers" is the title of a Para-Art production about a kidnapping carried out by the Yellow Peril menace Foo Yung, played by Stan Dvorak, who presumably brings a degree of authenticity to his performance thanks to a previous exploit involving a local tong. As a celebrity, Dvorak himself is a target for kidnapping, and in fact a gangster has infiltrated the Para-Art lot, disguised as a small-town theater-chain owner, looking for opportunities to snatch Dvorak. The gangster is given a copy of the "Snatchers" script, which gives him an idea for stashing or disposing of a victim. Seeing no prospect of snatching Dvorak, the gangster and his crew take the next best target, Dvorak's co-star Gladys Gale, by muscling in on a team of stunt drivers as a scene is filmed in which Gale's character is, in fact, kidnapped. As John Stanley, Dvorak has the studio publicize that he's Gladys's boyfriend so he can negotiate her release. The gangsters get their money and release Gale, only to take Stanley, assuming such a young swell should be worth some money himself. Now the gangsters' reliance on the "Snatchers" script works against them, since they don't realize that Stanley is Dvorak and knows exactly what they plan to do and how they plan to do it. Our hero prevails, inevitably, on the author's assumption that he keeps enough makeup stashed in a secret compartment in his show to turn himself into one of the gangsters at a crucial moment.

"Snatchers" left me unclear about whether Stan Dvorak or John Stanley was the real person, but earlier stories probably made that as clear as it would ever get. The hero doesn't really have much personality in either guise, while his boss at Para-Art is a mild Jewish stereotype. Pierce has an overconfidence typical of all pulp media in the power and efficiency of makeup that no one, I think, shares today, but this particular story amuses on a meta level as crime imitates art, only to find the truth about John Stanley stranger than fiction. I suspect the Dvorak stories were throwaway stuff compared to the No-Shirt McGee, or maybe even the Panhandle Series Pierce had started in Short Stories earlier in 1935. But Pierce is competent enough to ensure that "Snatchers" is a mildly entertaining page turner. For those who want to prove that to themselves, follow the link below.