VINTAGE PAPERBACK OF THE WEEK: Donald Hamiton, LINE OF FIRE (1955) 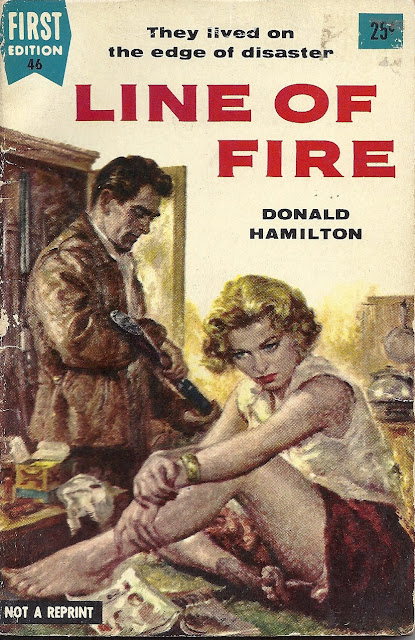 Donald Hamilton is best known as the creator of Matt Helm, a hard-boiled spy who was done a great disservice by the campy movies Dean Marin made in his name in the 1960s. I've only read one Helm book so far -- if I recall right it was The Removers -- but I liked it a lot. Line of Fire predates the Helm series by five years. It's a grim and gripping little affair. The back cover copy could hardly be more grim: 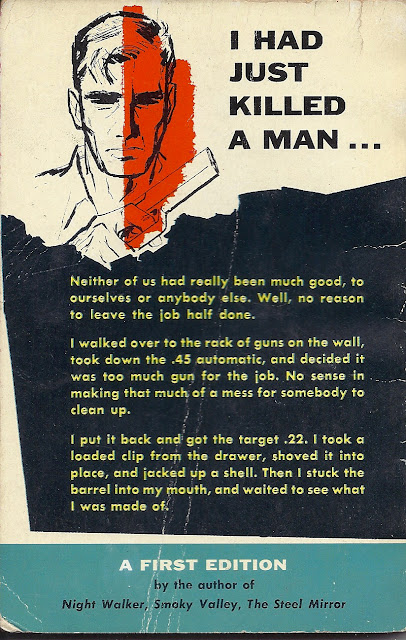 Hamilton's hero steps back from that abyss at the end -- the suicide passage is from the last two pages of the novel -- but Paul Nyquist's trouble begins when he doesn't kill a man. He isn't supposed to kill the man, who happens to be the Governor of the State. Instead, he's supposed to fire a near-miss so the Governor can say he's been under fire from the gangsters he's been fighting, when in fact he's in cahoots with the same gangsters -- or, to be specific, Paul's boss Carl Gunderman -- who've arranged this little show to give him political cover. The problem is that Paul, distracted by his mob escort, actually hits and wounds the governor. Worse, despite this being a Saturday a woman is in the building and finds the two arguing after the fact. Worse yet, when the mob guy decides he has to kill the woman, Paul kills him. Since Paul isn't going to kill her, despite her fears, he has to take her with him on the lam while he waits to see what Carl will do with him.

Paul and Carl have a conflicted relationship. Their bond formed on a hunting trip when Carl panicked at the sight of a wild board and Paul saved his life, at the cost of his manhood when the dying boar gores him. As a result, Carl trusts but distrusts him, knowing him to be dependable but knowing that he knows something damning about him in a personal if not a legal way.

To explain the nature of his injury to the woman, Barbara, he cites The Sun Also Rises:

"Did you ever read an old book by Hemingway? Ernest Hemingway? It's about a nymphomaniac, a Jew, a bullfighter and a character who was injured in a certain way. Well, I had a hunting accident once." I saw her eyes widen slightly. She did not move. I said, "It walks, it talks, it sleeps, it eats, it's practically human. It's capable of all normal activities, in fact, except one."

Paul announces this, after having hinted at it, after he has married Barbara in order to save her life, depending on the old trope of the wife being forbidden from testifying against her husband in a trial. He'd assured her earlier that "there will be ample grounds for divorce or annulment when the danger is past." Despite all this, you probably won't be surprised to learn that Paul and Barbara fall legitimately in love. It's when Paul thinks she's left for good, after all is over, and after he learns that Carl has killed himself, that he has his suicidal moment. Hamilton reverses course at the last moment."Who the hell are you trying to impress, anyway?" Carl asks himself. He's resolved to muddle through and is making breakfast when the happy ending happens. Until then, Line of Fire has been a bleakly introspective crime novel, grounded in Paul's knowledge of guns and other mundane details. It observes a certain gun fetish in the culture without quite sharing in it. Paul's life is saved at one point, after all, when a gunman who has the drop on him, with Paul's hands empty, invites him to a classic fast-draw shootout instead."Hopalong Cassidy wouldn't have liked it" otherwise, Paul observes, "Roy Rogers would have slapped his wrist. The Lone Ranger would have never spoken to him again." That sardonic attitude helps put Line of Fire over as an entertaining, engaging little novel (192 pages) of the kind they hardly make anymore. And to be fair to Hamilton, I wasn't sure whether he'd cop out in favor of a happy ending until that very last page. How happy is it, anyway, when the heroine says, before the final clinch, "It won't hurt any more five years from now than it does this morning....We may lose each other anyway, but it seems stupid not even to try." Fair enough.
Posted by Samuel Wilson at 3:54 PM