BELLOW BILL WILLIAMS in "FANGS OF THE FETISH" 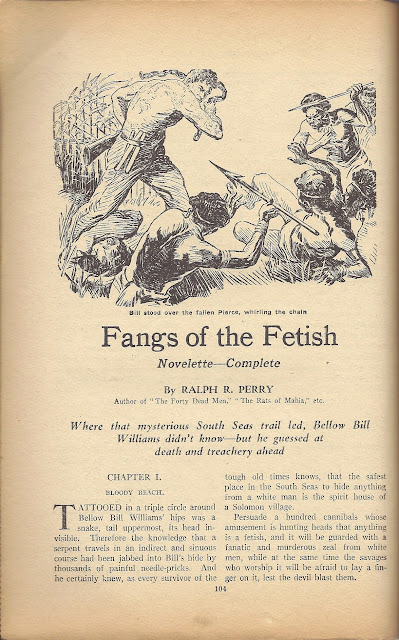 The first Bellow Bill Williams story I paid to own is actually one of Ralph R. Perry's weaker efforts. That's because Perry as narrator gets a little too omniscient for his own good, warning readers in advance that Bill is putting his trust in the wrong man. He'd run to the rescue of an old-timer who was proving admirably cool while under attack by superior numbers, and while it's admirable of Perry to show how Bill's misjudgments can get him into trouble, it's better most of the time to show rather than tell. Also, while Perry at his best plots complex action at a breakneck place, "Fangs of the Fetish" is more concerned with sudden revelations about people and their pasts that bring the action to a halt. In it, Bill is convinced to help a man recover a plaque revered by savages as a powerful fetish because the plaque has information embedded in it that will help the man reclaim his rights from a former partner after years in prison. Too easily impressed by this man's coolness under fire, Bill eventually learns that he's the real villain who wants the information for blackmail purposes. From out of nowhere, virtually, emerge two new characters intimately tied to the family scandal that forms the basis for the blackmail plot. Bellow Bill forces a final test of manhood on all three characters, from which Perry draws an ambivalent moral about the capacity for courage even among the wicked. I suspect that Perry himself realized that he'd misfired here, because he slowed down after setting a blistering pace in 1934 and produced only two more Bellow Bill stories in 1935 (and only one more ever after that), those two being two of his best. Even this one still has some nice action sequences, and if you like the freebooting spirit of the South Sea sailor subgenre you should still find "Fangs" entertaining. Judge for yourself by downloading the 22 page novelette from the link below. In the months to come look for more Bellow Bill from my personal pulp collection on this blog.