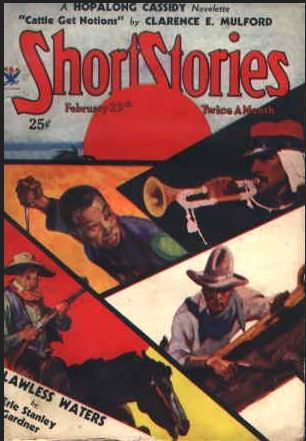 An unusual cover design for a 1934 issue of Short Stories, clearly intended to highlight the variety of content to be found inside. I can't tell from the table of contents whether it accurately represents the contents of this particular issue; nothing listed really says "Foreign Legion" or "Yellow Peril" to me, for instance. You'll also notice a certain disproportion; there are two cowboys when they could have had, let's say, a deep sea diver, a polar explorer, a soldier, a safari dude or someone like the Major, etc. But there often seemed to be more western stuff in Short Stories than anything else. The headline writer this number is Clarence E. Mulford, who'd been writing Hopalong Cassidy stories since 1905. One year from this point, Hoppy would make his film debut, planting the seeds of a craze that would break out in the early days of television. Short Stories had been Hoppy's headquarters since 1926, but Mulford would take him elsewhere for a time, starting in 1935, before bringing the character for two final serials in 1937 and 1941. Erle Stanley Gardner, credited in the lower left-hand corner, had already created Perry Mason by this point but kept plugging away in the pulps. In February 1934 alone he had two stories in Detective Fiction Weekly, one in Argosy and one in Dell's All Detective besides this issue's "Lawless Waters." Cliff Farrell, a western specialist, is the best-known to me of the other contributors. You probably did come close to "action stories of every variety" in Short Stories, but since that was Argosy's motto, the cover artist (or editor) decided to show rather than tell.
Posted by Samuel Wilson at 12:00 AM