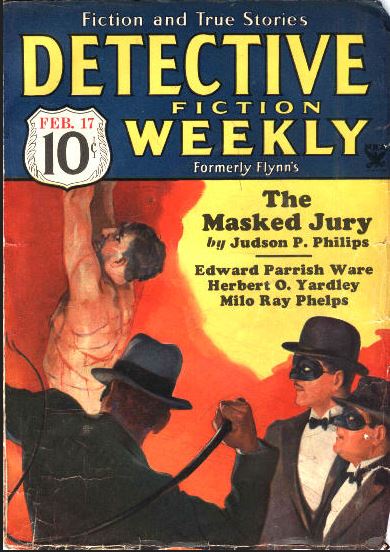 Pulp readers often claimed to be embarrassed by the magazines they loved. They claimed to be embarrassed specifically by the magazine covers: too violent, too suggestive, too something. In our less straitlaced age it's hard to believe people could be ashamed to buy pulps in the store or read them in public, unless we mean the under-the-counter "spicy" mags or the more sadistic "shudder" pulps. But here's a 1934 Detective Fiction Weekly I can readily imagine embarrassing its regular readers. The cover story is the second appearance, according to the Fiction Mags Index, of Judson P. Philips' Park Avenue Hunt Club, who'd made their debut three weeks earlier and would return a month later. With highly-publicized supercriminals like John Dillinger running amok, highly organized rackets appearing to control whole cities, and a general fear of social breakdown during the Great Depression, vigilante fantasies were popular in the early Thirties, in movies as well as in the pulps. This is the era from which superheroes arose, after all. I can't speak for this story -- I don't think I've ever read any Hunt Club stuff -- but that cover may have been more embarrassing to a potential reader because it puts what looks in retrospect like an unflattering face on the vigilante fantasy, rendering it almost pornographic in its sadism. Today, a cover like this more likely means you'll pay more for this issue on the collectors' market. Apart from Edward Parrish Ware I don't know the other authors in this number, but that cover definitely does its job. You can't help but be curious, unless you're very easily revolted, about the story it illustrates.
Posted by Samuel Wilson at 12:00 AM