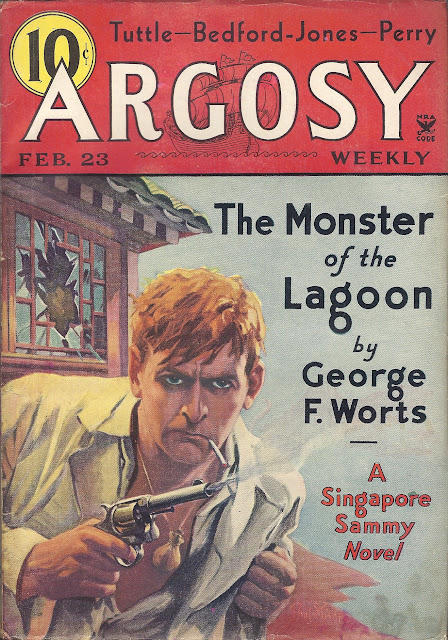 The February 23, 1935 Argosy is as loaded an issue as you're likely to see. For starters, it concludes Eustace L. Adams's serial Anywhere But Here, which I'll have ready for you to download later this week. And as Adams wraps up his story, George F. Worts launches a Singapore Sammy serial. Worts was one of Argosy's superstars in the first half of the Thirties, with Sammy and ace defense attorney Gillian Hazeltine being two of the pulp's most popular recurring characters, and that's not even counting his side gig as Loring Brent, the creator of Peter the Brazen. Singapore Sammy Shay is the best of Worts/Brent's creations: a slightly disreputable globetrotting treasure hunter with a grudge against his devious deadbeat dad. While Worts would close up the Loring Brent shop with a final Peter the Brazen novelet later in 1935, Sammy would get three serials, counting this one, over the next two years before his creator jumped to the slicks and got boring.

Now that I've covered the serials, let's see what else this issue has to offer. 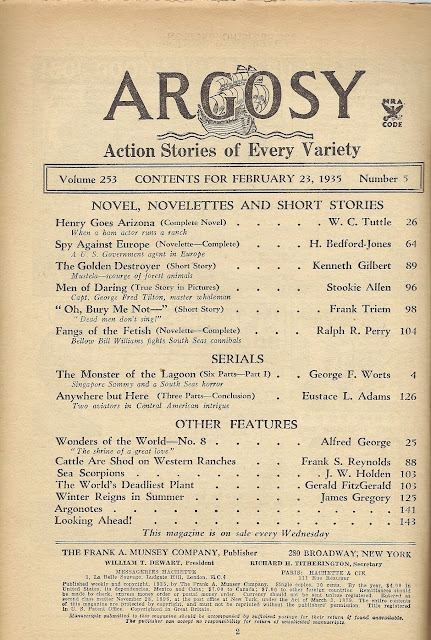 Two top pulp hands introduce new characters this issue. "Spy Against Europe" is the first of three H. Bedford-Jones stories about a spy who comes to be known as The Sphinx. To be honest, I can understand why the series didn't last long after reading this one. More of a milestone is W. C. Tuttle's contribution, "Henry Goes Arizona." To explain the apparent illiteracy, one "goes Arizona," presumably, the way one "goes Hollywood." Henry, to introduce him fully, is Henry Harrison Conroy, a relic of vaudeville who finds himself heir to a ranch in Wild Horse Valley, Arizona. Dismissed as a dude and a drunk, and decried as "The Shame of Arizona," Henry's sardonic intelligence, and a little help from his eccentric new friends, always gets the better of the bad guys in the modern but still wild west. Perhaps the ultimate embodiment of Tuttle's specialty, the comic western detective story, Henry was an instant hit with Argosy readers, and proved popular enough to justify an M-G-M adaptation of this issue's origin story, only with Frank (Wizard of Oz) Morgan in the title role rather than the too-obvious W. C. Fields, though Fields alone, as both actor and writer, could have done the part real justice. Before 1935 was over Henry got his first Argosy cover, and from that point forward his red-nosed rotundity fronted any issue that started one of his serials. Henry survived the collapse and near-demise of Argosy by moving to Short Stories, where his adventures continued to the end of the 1940s.

While Henry's debut makes this an historic issue and the two serials are terrific, the true highlight this week, for me at least, is Ralph R. Perry's "Fangs of the Fetish," an appearance by my own favorite Argosy character, Bellow Bill Williams. I'll be spending a large part of this week proselytizing for Bellow Bill: scanning "Fangs" for your reading pleasure and linking you to other tales while compiling a preliminary checklist of the tattooed pearler's career that will expand greatly on the Fiction Mags Index's inventory. Argosy hardly gets more pulpy in the blood-and-thunder sense than when Bellow Bill roams the South Sea islands, as you'll find over the next few days.

Once I make the Adams and Perry stories available, most of the contents of this issue will accessible to non-collectors in one way or another, as the Bedford-Jones and Tuttle stories have recently been republished by indispensable pulp-fiction preservers Altus Press, while RadioArchives.com recently issued The Monster From the Lagoon in its entirety as an e-book. If I'm feeling generous I'll scan the Kenneth Gilbert and Frank Triem stories, one an animal story, the other a western short, so that pulp fans can collect a virtually complete issue of the venerable weekly from somewhere near the peak of its powers. For now, I leave you with a word from this issue's sponsor: 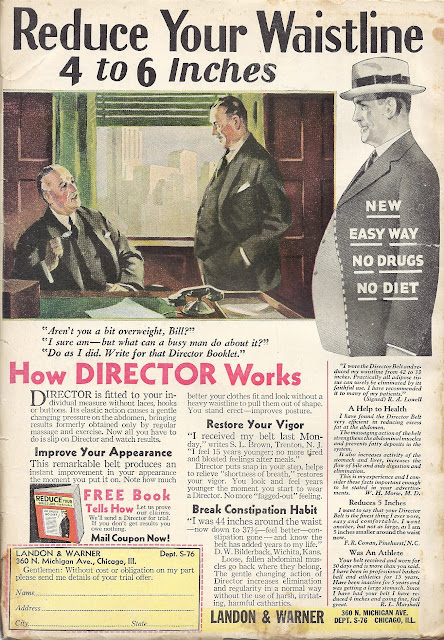