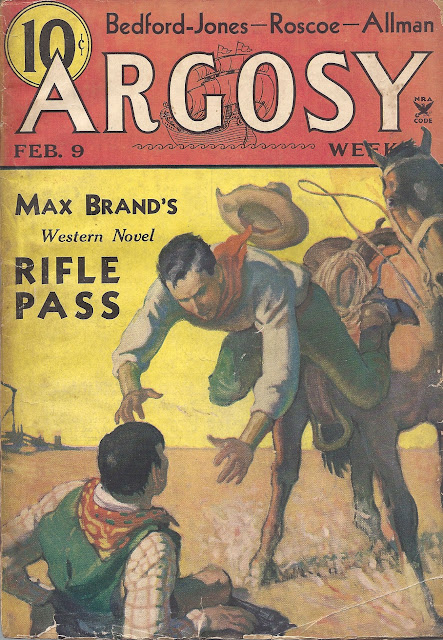 This 1935 Argosy is one of the rattier items in my pulp collection. I acquired it in part because it has a chapter of one of George Challis's Firebrand serials, but mainly because it had the opening installment of another serial, Eustace L. Adams's Anywhere But Here. Adams was an action writer who more or less specialized in aviation stories, though he could do without the flying quite nicely. Anywhere But Here is a buddy story about two fliers who cut quite a swath through Latin America back in the day, having helped out with a revolution or two. Al Burke and Bat Gillespie had had enough of soldiering-of-fortune and had moved to New York, only to be dragged back to the nation of San Lorenzo, whose president they'd helped to install, to look after an American company's interests that are being challenged by French and German rivals. Complicating matters are Al's kid sister Mickey, now a famous aviatrix in her own right, who to Al's alarm is falling in love with Bat, and Carmencita, a San Lorenzo lady over whom Al and Bat had been romantic rivals in the past. These are all hard-living, hard-drinking, hard-boiled folks, for all the romance that develops, and Adams strikes just the right tone for this sort of story. I've liked a lot of what I've read from Adams and I may do you a favor and scan the serial into a little novel you'll all probably enjoy. But let's look at what else is inside this issue: 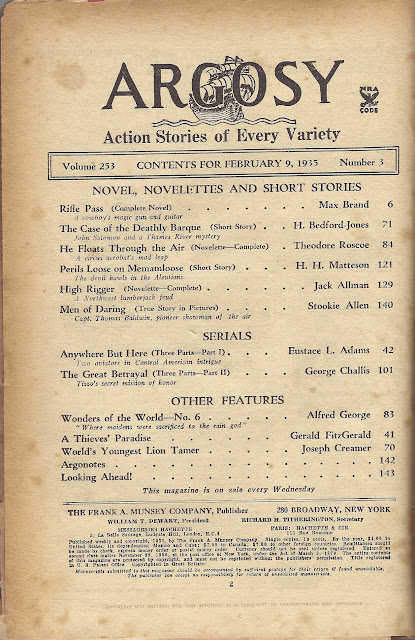 As was often the case in this period, Frederick Faust has multiple stories in an Argosy, including the Challis serial and the cover story under his most famous pseudonym. Max Brand's "Rifle Pass" is a meandering "complete novel" of 36 pages in which a sheriff's underachieving son is deputized in order to pressure him into proving himself by catching a notorious outlaw. The son has skills but hardly seems to give a damn about anything, and is soon suspected of turning outlaw himself. Western fans can probably figure where this is headed but it's a fair page-turner just the same.

As for the rest, Faust's great rival for productivity, H. Bedford-Jones, contributes a short story about his old series character, the Cockney detective John Solomon, while Theodore Roscoe's "He Floats Through the Air" is a grim little circus story about a paranoid aerialist. H. H. Matteson's "Perils Loose on Memamloose" is a comical tale of the Aleutians in which a white man's awful cornet playing stirs up the natives, and Jack Allman's "High Rigger" is a standard, readable lumberjack story. This issue covers a lot of territory and all of it feels like pulp rather than rejects from the slicks like a lot of latter-day Argosy. I'm not the most knowledgeable Argosy fan but my feeling is that 1935 saw the venerable weekly at its peak. I plan to submit more evidence for this claim over the next few Tuesdays. There are 23 1935 Argosy issues in the unz.org trove so feel free to explore for yourself before coming back here for more.


This issue of Argosy is sponsored by: 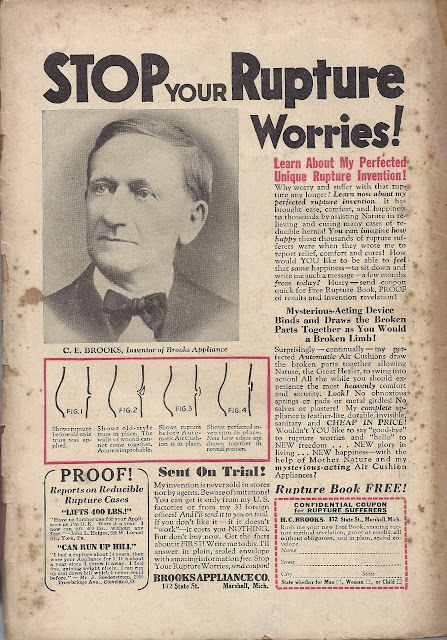