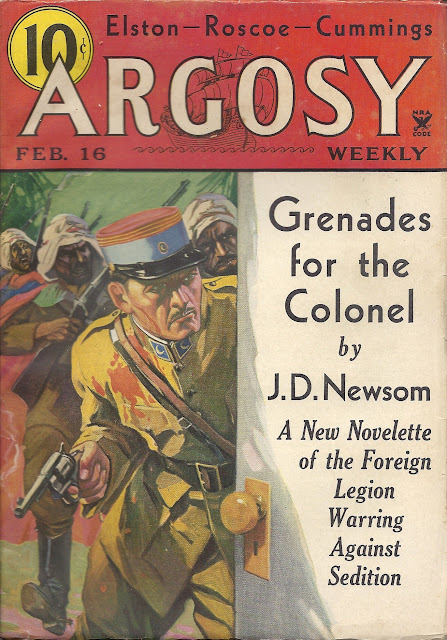 You might assume that Foreign Legion stories are celebrations of imperialism, but usually they're more cynical than that, or too much concerned with the personal struggles and feuds within the Legion to worry much about the politics. J. D. Newsom was one of the top Foreign Legion writers, but in an autobiographical sketch contributed to this 1935 issue's "MenWho Make the Argosy" column, he makes his own worldview more clear. 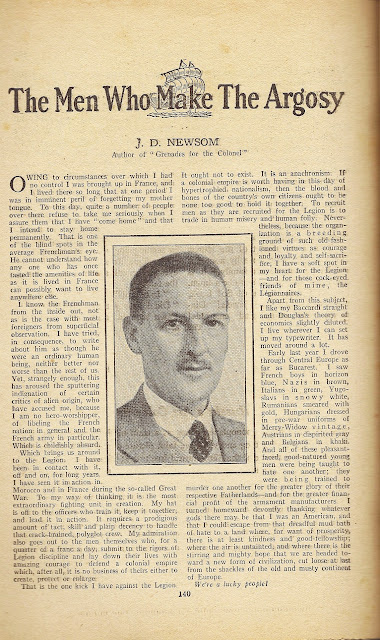 Newsom sounds like no fan of either "hypotrophied nationalism" or the sort of imperialism that depended upon a Foreign Legion. "Grenades for the Colonel," on the other hand, takes a "natives can't be trusted" tack, as a disgraced Legion unit proves the only defense against a Moroccan uprising stirred up by a local demagogue who "had the same hold upon his people that some European dictators have acquired of late years in more civilized communities." This rabble-rouser stirs up some of the Legion's nominal allies, the Senegalese Tirailleurs, whom the rogue unit had earlier beaten up in a street brawl. It's not the best I've read from Newsom but it's entertaining enough. Despite the patriotic optimism he expresses above about America's potential for "a new form of civilization," Newsom would later in 1935 write a story about an American legionnaire in Indochina that in a way feels prophetic of things to come. He was just about done with pulps at this point and soon to be recruited for the Federal Writers Project, a New Deal program he would eventually lead. I find it interesting that a pulp writer would land such a job, but I suppose such a person would know all about lifting oneself out of poverty with a pen.

Let's see what else is in this issue: 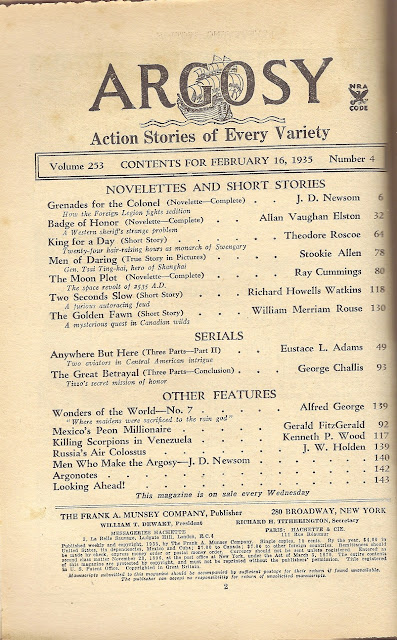 By a comfortable margin, the serials are the highlights of this Argosy. Eustace L. Adams continues his kickass American-airmen-in-Latin America story Anywhere But Here, as you'll see for yourself shortly, while Frederick "George Challis aka Max Brand" Faust wraps up his second serial about Tizzo the Firebrand, The Great Betrayal. Best of the rest is Theodore Roscoe's satirical story "King for a Day," a sketch of the stressful life of a mitteleuropean monarch that all serves to set up a punch line about an American tourist dreaming of changing places with the ruler he doesn't recognize tending a garden. Just as Newsom invokes fascism faintly in his story, so Roscoe numbers Nazi Germany among his protagonist's many problems. Bits like these add contemporary color to the stories, but pulps had not yet taken a propagandistic or Popular Front turn. The goofiest story this week is easily Ray Cummings' fantastic, as Argosy called science fiction stories, "The Moon Plot." This look at the future from one of the pioneer sci-fi writers, who identifies himself as a 23rd century narrator, becomes instant camp when the defeat of a Martian plot to overthrow the government of the Moon hinges on a heroic girl disguising herself as not just a boy, but a Spanish boy, complete with the comic-strip accent, to win the confidence of a half-breed revolutionary. It's one of the few pulp stories I've read that I honestly find unintentionally hilarious. That leaves us with Allan Vaughan Elston's novelet "Badge of Honor," which builds up to the hero telling a noble lie to a small boy about the boy's father, Richard Howells Watkins' auto-racing story "Two Seconds Slow," and a little bit of torture pulp from William Merriam Rouse, "The Golden Fawn." Adams, Challis, Newsom and Roscoe make this issue worth having, but next week's issue, I think, is even better. Nevertheless, this issue of Argosy is brought to you by... 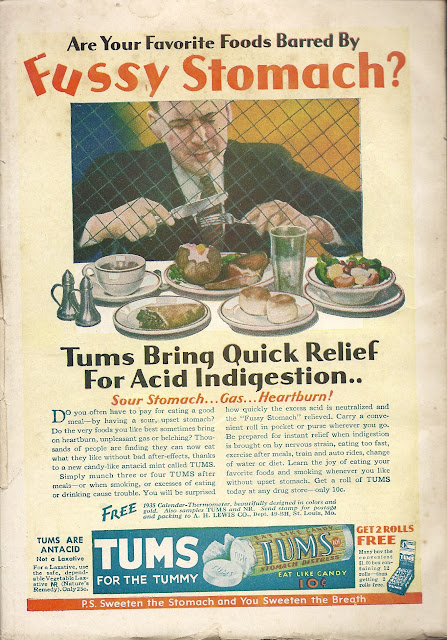